I was never going to be the biggest Led Zeppelin fan on my block, not with the Korf boys around, and between those guys, and New York rock radio in the 1970s, I never felt the need to get any more into them that what could be absorbed simply by arriving at the bus stop every morning before school, or tuning into Carol Miller at night. That was always more than enough. 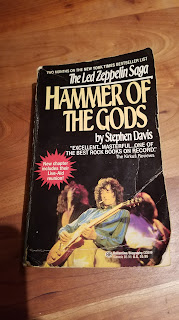 And so it went for some 40 years till coming across a used book shop and this irresistible compact paperback with a NEW chapter on the Live Aid reunion!

I'd actually read Davis' more recent follow-up, LZ '75, as well as Michael Walker's reflection on their 1973 U.S. tour, a few years back but by dropping in in the middle of "the Led Zeppelin Saga" those books only illuminated brief moments following the establishment of their superstardom, and said little of what drove them, how they came to be, or whatever became of them. This book is that, and it's not all that pretty.

The strenuousness with which surviving Zeppelinites dismiss HAMMER OF THE GODS as sensational and exaggerated suggests to me Davis cuts closer to the bone than the band ever wished to be examined. It's undeniable that Zeppelin's rise to the top accompanied a hostility toward the press which was repaid in kind with harsh reviews of their art, and why Zeppelin took their sound directly to their audiences whose fervor broke down barriers of radio. It's also why skeptics like me figured a little Zeppelin was enough.

As you probably know, Zeppelin arose from the ashes of the Yardbirds, the U.K. guitar-rock pioneers whose alumni included Eric Clapton and Jeff Beck. A friend of Beck's named Jimmy Page was a young London studio wizard with hundreds of session credits recruited near the end of the Yardbirds run -- shortly before the band would disintegrate under personnel issues and years of dubious record-company interference that attempted to present them as a crossover pop act. Nevertheless, they still had a booked Scandivavian tour to complete in the fall of 1968.

With the help of Peter Grant, the Yardbirds' street-smart thug of a manager, Page sought to assemble "the New Yardbirds" in the image of its latest splinter, the Jeff Beck Group. They would traffic in a blues-based heavy rock sound they were convinced America would love, and were determined to do so free of the artistic shackles that had tripped up the Yardbirds.

New bass player John Baldwin, aka John Paul Jones, like Page, was a versatile London session veteran and arranger. A search for a dynamic frontman led Page to Robert Plant, a free-spirited, 19-year-old wailing blues fanatic who according to Davis "looked like a fairy prince" and had fronted several bands around the Midlands blues scene. Plant recommended hard-hitting, up-and-coming drummer John Bonham, with whom he'd previously played in Band of Joy. Bonham had little interest initially, but after Page saw him in action, a spirited recruiting effort secured his services when he might otherwise have gone on to play with another U.K. blues comer, Joe Cocker.

This group set off to complete the Yardbirds' obligations in September of 1968 and returned confident they'd make their own. The chemistry was there: Jimmy liked Bonzo's big beats; Robert's wailing voice could echo Jimmy's wild solos. They renamed the band after a skeptical remark by the Who's John Entwistle, taking out the "a" in Lead so that Americans wouldn't mispronounce it.

Conceived from the start to conquer America, Zeppelin didn't let anything stand in its way, including ethics. While they can't be faulted for their taste, their list of uncredited ripoffs, most from the early years, is a long one. Grant and road manager Richard Cole in the meantime felt the old rules of the touring game shouldn't apply to them and as a result revolutionized arena and stadium performances. When promoters didn't give Zep what it wanted, no problem: Cole, Grant and the roadies literally beat it from them.

Davis' story, appearing heavily sourced from Cole, is loaded with such wild tales from the road: Page's taste for young -- real young -- girls, and Plant and Bonzo's eye-opening introduction to American groupies of the early 1970s may have appeared salacious in 1985 but look practically horrifying today. The road gave license for the boys to forget they had devoted families at home, and for the drinking and drugs that would eventually destroy them.

Zep's take-no-prisoners approach at times obscured the fact they had a sense of humor, but it afforded them the freedom to pursue musical visions and peculiarities together. The precocious Page had an interest in black magic and firebombing guitar blitzes. Plant had a thing for mystic Celtic folk (a cousin to American blues), and his lyrics could be dumb, but his effort can't be denied. Jones, who virtually escapes scrutiny amid Davis' larger-than-life profiles of his bandmates, brought textural versatility to the arrangements. Bonzo anchored it all with fearsome thump, but was dangerously wild and unpredictable when drunk, which was most of the time. They dropped sinister bombs-away thunder and folky acoustic psychedelia inspired in equal measure by blues legends and Joni Mitchell. Plant and Page traveled the world, absorbing exotic sounds in places like Morocco that would turn up in the grooves of their later records.

These enormous appetites would also be their undoing, Davis writes. On a tour break on an island in Greece in 1975, Plant was involved in a bad automobile accident that nearly killed his wife Maureen (who was driving while drunk) and resulted in serious injuries to Plant, their daughter, and the daughter of Page, who was also in the car. After a long break while Plant recovered, Zeppelin's 1977 U.S. tour was interrupted when Plant's young son died suddenly of a rare respiratory virus. Bonham, Cole and Grant in the meantime were facing charges that they assaulted and hospitalized a security guard at a concert in Oakland.

"It was as if the disaster that struck Robert Plant's family sapped Led Zeppelin of its remarkable good fortune and the group's insatiable will for domination," Davis writes. What's more, he said, the superstitious Plant may have blamed Page's dabbling in the occult for the tragedies that visited him. Page by this time had developed a heroin addiction and was working erratically in the studio and on stage: He rushed through production of 1976's PRESENCE, considered one of Zeppelin's lesser efforts, and by the time 1979's IN THROUGH THE OUT DOOR dropped, Jones was leading the band musically.

The final tragedy came as Led Zeppelin prepared for a U.S. tour in 1980. Bonham was drinking heavily at Page's home in London, passed out, and never awoke. He was only 31. Zeppelin, after eight studio albums over a dozen years, essentially died with him.

I remember that day -- I was home from school faking an illness when the news came over the radio, and intercepted my friends after the school bus dropped them off my street. The Korf boys wouldn't believe it.

Like Zeppelin itself, HAMMER OF THE GODS is audacious, controversial, often brilliant and inspiring, inasmuch as it got me to consider Led Zeppelin for the millionth time, but also the first.
Posted by Jon Springer at 3:42 PM