Sharing This Night That Will Soon Be A Blur 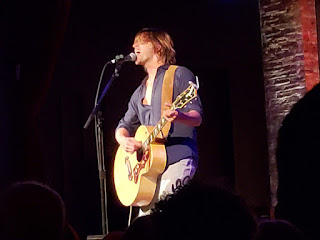 Ignorance of contemporary music can have its rewards if you're not scared to arrive at a party a 20 years too late.

That's sort of how I felt watching Rhett Miller perform at City Winery this week. It was the first time I'd seen Miller, who is best known as the front man for the Texas-based alt-country rockers the Old 97s. That band's 90s and oughts heyday was largely overlooked by me: I'd vaguely known who they were, but until a few years ago hadn't done enough to distinguish them from others in their ballpark. For a while there I conflated the Old 97s and the Old Crow Medicine Show, in a manner not unlike my brain tangled the Hoodoo Gurus and Husker Du in the 1980s. I just didn't know better. 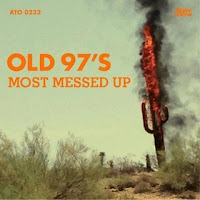 It wasn't until 2014 and MOST MESSED UP -- the band's 10th album! --  that I finally caught on. That album is so good -- funny, hardrocking, full of goofy energy, a classic of the life-on-the-road genre and only the slightest bit Western twangy -- to inspire a journey into the past where I discovered these guys had lots of terrific stuff I'd overlooked.

In the meantime, I'd had a second connection to make: the name Rhett Miller had bubbled up through my power-pop feeds over the years, and I was familiar with his album THE INSTIGATOR (2002). Eventually I pieced it all together and realized the singer and the band belonged to one another and had parallel careers. The whole load of it eventually worked its way into heavy rotation around the house and so for me, going to this show was as though I was seeing a hot band.

Little did I know there were still more surprises ahead.

Miller is something of the David Lee Roth of solo acoustic performers, bringing a huge physical energy, charm and a bag of tricks -- most notably a windmilling strum hand and shag-shakes -- to the act. He's got an expressive yelp conveying the sad-sack, whiskey-dicked losers at the heart of most of his songs. I can't imagine there were many at the show like us who hadn't seen Miller before, but that was our reward. We rocked and we laughed, totally entertained.

Recently, Miller authored this sobering takedown of the modern music industry, wondering whether domination by gigantic streamers, "Swedish hit factories" and YouTube leaves anything for young musicians to aspire to. I wish I knew a solution. I will note that the stream -- particularly the late lamented Rdio -- is what I have to thank for having discovered the Old 97's and Rhett Miller to begin with. The economic model is most messed up, if you will; and so it's not without internal conflict I am sharing the below sampler.

Posted by Jon Springer at 4:51 AM No comments: