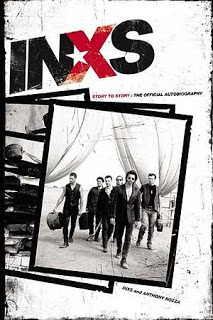 Like Foreigner, INXS is one of those bands you'd never consider particularly remarkable until confronted with the sheer volume of songs of theirs you can't help but know by heart. But unless you really love them, and I don't, you may as well skip the autobiography.

Co-authored by the surviving five band members and American writer Anthony Bozza, INXS: STORY TO STORY at times reads like a 300-page article in Tiger Beat, impressed by just about everything about them (the songs, their looks, their fame, how much drugs they did, how many girls they slept with) while working hard to craft a narrative that they were musical revolutionaries of the 1980s, "intense, edgy and progressive in their compositions, poetic in their storytelling, and romantic in their outlook."

And then it gets to their good points...

There is a story there. The Farriss brothers (Tim, Andrew and Jon, oldest to youngest) were sons of an insurance executive who grew up in Perth, and later Sydney, where they encountered schoolmates and acquaintances that would complete the sextet -- jocky bassist Garry Beers, geeky sax/guitar player Kirk Pengilly and charismatic vocalist Michael Hutchence. They would remain a unit until Hutchence died in 1997, releasing 10 albums over that span but ultimately destined to be remembered as a "singles band" and phenomenon of the 1980s.

Performing first as the Farriss Bros., young INXS was a Pink Floyd influenced "groove band" whose character developed during punishing van trips back and forth across Australia (drummer Jon Farriss, then still in high school, accompanied his parents when they retired to Perth but the band found the scene there myopic and returned to Sydney, dropout Jon in tow).

In Sydney, they caught a break as an opening act and foil for fast-rising rockers Midnight Oil, whose manager gave them a new name (in-accessible? In excess?), and encouraged a flamboyant stage show before becoming a born-again Christian with designs on turning them into Jesus vehicle. Instead, INXS pivoted toward an abrasive young rival promoter, Chris Murphy, who’d grow into the into the band's “seventh member,” and ruthless and influential dealmaker.

Nearly all of the writing for INXS fell to Andrew Farriss and Hutchence, mirror images of one another. Farriss was introverted, chubby, a homebody and a Beatles fan and spent most of his stage time seated behind the keyboard; Hutchence the handsome sexed-up manchild with a taste for dance music and a magnetic presence. Their partnership crafted a modern sound suited for the "new wave" movement and distinct from their hard-rocking peers in Sydney's club scene. Their lyrics were rarely more than words to accompany Jon Farris and Beers' dance rhythms, augmented by three guitars and/or guitar/sax/keyboard, as the tracks from their self-tiled debut (1980) and 1981's Talking Heads-ish UNDERNEATH THE COLOURS demonstrate:

Producer Mark Opitz signed on for SHABOOH SHOOBAH in 1982, a record that squeezed out two home-run singles -- "Don't Change" and "The One Thing" -- the latter becoming the band's first U.S. hit and an early MTV staple.  Bozza describes their first trips to the U.S. as a kind of boys-club crusade, stealing Adam Ant's girlfriends and tour-bus trysting with various Go-Gos. They liked to party.

INXS knew it was onto something when their burgeoning dance-pop caught the ear of New York producer Nile Rodgers, who called on Darryl Hall to sing backing vocals on "Original Sin," the lead single from 1984's THE SWING and the band's first worldwide hit. It was a similar pairing of Australian brother act and dance producer that launched the Bee Gees to the stratosphere 10 years before. A string of similarly slinky funk-pop singles followed from 1985's LISTEN LIKE THIEVES (What You Need, Shine Like It Does); 1987's hit-jammed KICK (New Sensation, Devil Inside, Need You Tonight, Never Tear Us Apart, Mystify, four of them reaching the U.S. Top 10); and 1990's X (Suicide Blonde, Disappear) -- making them superstars.

Hutchence, raised by a celebrity make-up artist mother in Japan, Beverly Hills and Sydney, by then was a swaggering free spirit and embodiment of the 1980s front-man, with killer looks and a sensuous, confident, and often sad delivery. Offstage, he was a fool who could barely care for himself, maintain a healthy relationship, or turn down a drug. He never cleaned up after himself, or bothered to get a driver's license.

One late night in Copenhagen in 1992, Hutchence was knocked cold in a street fight with a cab driver. He hit his head on the pavement, triggering a brain injury that among other things, took away his sense of smell and left him thereafter prone to wild mood swings and violent outbursts, once pulling a knife on bandmate Beers.

Bozza speculates that his loss of smell -- a condition often accompanied by depression -- may have contributed for a thirst for stimulation that killed Hutchence, who was found dead in a hotel room believed to have been practicing autoerotic asphyxiation (he was ready for a new sensation. Too soon?). Hutchence was despondent at the time over his inability to win custody of the children of girlfriend Paula Yates. Their father, Yates' 18-year husband and British rock royalty Bob Geldolf, sensibly wouldn't allow it. The Hutchence-Yates relationship (they had a daughter together) was scandalous from the start and drew the paparazzi wherever they went.

The band by then was in a rapid popular decline. 1992's WELCOME TO WHEREVER YOU ARE saw them trying to keep pace with the alternative revolution in a manner not unlike U2 would at the same time. They live up to their name gloriously on "Baby Don't Cry" but the hits didn't follow, especially in the U.S.

Australian audiences in the meantime grew resentful of the band, particularly after they big-leagued a benefit festival in Sydney in 1992, demanding larger dressing rooms, a bigger budget and more elaborate equipment than the supporting acts, and then delivering an aloof performance (The star of that show was Crowded House, Chris Bourke wrote in his book: "Hutchence, dressed in white, struck messianic poses and finally deigned to speak to the crowd six songs in. 'Hello,' he said. 'You all turned up. Let's just play some fucking music.'") 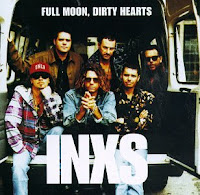 Chastened, INXS deliberately dialed back the glitz on 1994's FULL MOON, DIRTY HEARTS, going so far as to break with a carefully crafted visual branding and feature a cover photograph of them wearing street clothes in the back of van, and booking small clubs on a tour, but the back-to-basics act only served to make them look further out of touch, and it was obvious Hutchence's heart and mind had departed.  ELEGANTLY WASTED, recorded between Hutchence's solo recordings and burgeoning acting gigs, was released shortly before his death in 1997.

Perhaps as a means of cashing in on whatever future Hutchence's death robbed them of, INXS has continued as brand if not a band, in the years since, cranking out among other things a made-for-TV movie, the reboot experiment of the ROCK STAR reality television show and the authorized biography reviewed here. They'll always have the singles.
Posted by Jon Springer at 7:26 PM