A Blind Date With Destiny

They had a worldwide record contract before they'd ever played a gig, and a debut single that went top 10 on three continents. 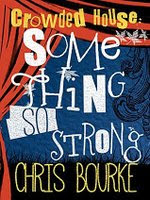 Yet for a band designed to be a commercial endeavor from the start, Crowded House would find it difficult to sustain its early success, particularly in the U.S. There were any number of reasons for this, from fickle consumer tastes to an inconsistent lineup to record company politics and occasionally to the band's own indifference to it. But there was rarely any music to blame: Crowded House, Chris Bourke writes in the biography SOMETHING SO STRONG, was led by one of the world's most accomplished songwriters, if one of the least celebrated around here.

Crowded House arose from the ashes of the zany New Zealand art-pop outfit Split Enz, which mirrored its descendants by succeeding nearly everywhere but the U.S., where they're remembered popularly if not quite accurately as "one-hit wonders."

Tim Finn and his younger brother Neil were born to Irish Catholic immigrants in Te Awamutu, New Zealand. In the Irish tradition the family would sing together, and though six years Tim's junior, Neil would keep up with his brother's interest in music: they learned guitar and piano at the same time. Tim would found Split Ends (later amended to Enz, the 'NZ' referring to his home country) while a college student in Melbourne. Known in their early days for theatrical, avant-garde art-rock powered by virtuoso keyboardist Eddie Raynor, an 18-year-old Neil would replace guitarist and co-founder Phil Judd in 1977. In part because Neil was still mastering his instrument, the band pivoted to a simpler sound increasingly influenced by Neil's growing skill as a pop songwriter. Neil was partial to the classic British pop tradition (BEATLES FOR SALE was a favorite) and his contribution as singer and songwriter alongside Raynor's distinctive keyboard produced the band's biggest international hit "I Got You" off 1980's TRUE COLOURS album.

Two followups dominated by Tim's songs --  WAIATA (1981) and TIME AND TIDE (1982) -- included early MTV hits like "Six Months in a Leaky Boat," and encouraged the elder Finn to pursue a solo career. A Neil-led Enz released CONFLICTING EMOTIONS in 1983 (featuring his ballad "Message to My Girl") and finally SEE YA ROUND (1984), by which time Neil was ready to leave his brother's shadow and form his own group.

He took along Enz' most recent drummer, Aussie Paul Hester, with whom he'd developed a particularly good rapport. Their performance as a duo at a Melbourne party attracted young bassist Nick Seymour, who asked to join them.

Determined to avoid the common obstacle of Australasian music reaching international shores months after release in their home country, the trio purposefully sought worldwide label and distribution deals before they ever so much as toured, recorded or even had a name (they initially went by the Mullanes after Neil's middle name). In Los Angeles, they signed with Capitol, and recorded their debut album as Crowded House after the Hollywood apartment they shared while it came together. 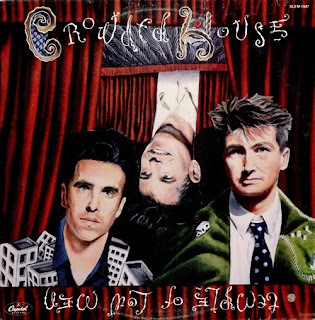 Though dominated by Finn, who wrote and sang nearly all their songs and held the power to hire and fire (Hester referred to the band as "Two dorks and a dictator"), Crowded House were very much a sum-of-their-parts act, Bourke writes. Hester provided vocal harmonies and a wild sense of humor bringing life and character to the live act. The stylish Seymour was a talented artist and painter who crafted stage clothes, and influenced their image. He painted all of their album covers including the outstanding TEMPLE OF LOW MEN pictured here. Capitol appointed American keyboardist Mitchell Froom to produce: Froom would craft a refined, retro sound virtually free of the gaudy production of his mid-80s contemporaries. The "Whiter Shade of Pale" style organ solo highlighting "Don't Dream It's Over" was his, and Froom performed with the band as it set out to take on the world.

Capitol officials were reticent to debut the act behind a ballad, so initially promoted the rousing "Mean to Me" as the lead single off their first album. But there was no denying the appallingly gorgeous "Don't Dream It's Over" with its weary-but-hopeful message and gigantic chorus, heavenly organ and Neil's boom-chucka guitar known in New Zealand as the "Maori strum." Helped also by an award-winning video, the song reached No. 2 on the U.S. singles charts, No. 1 in in New Zealand and Canada, and as high as No.7 in Europe. Nearly 30 years later, it's proven one of the most enduring pop singles of all time.

The success of "Don't Dream" paved the way for follow-up chart singles in '87 like "Something So Strong" and "World Where You Live," giving the band plenty of momentum to plow into TEMPLE OF LOW MEN. Though nobody doubted TEMPLE was a fine record, an air of doubt surrounded it, with the band joking it should have been titled "Mediocre Followup" and Capitol kicking itself for being unable to convey ultimately borne-out fears that it lacked a comparable hit single. The Froom-produced disc is a somber affair carried by ballads "Into Temptation," "Better Be Home Soon" and "Mansion in the Slums" but lacks a punchy energy beyond the jazzy"Sister Madly."

Dismayed by the relatively weak reception for TEMPLE, Finn battled a case of writer's block (for which he blamed Seymour, who was temporarily sacked) and didn't regain his touch until a songwriting session with his brother Tim, whose solo career was also missing its mark. Contemplating their collaboration for a Finn Brothers project, but also under the gun to deliver a Crowded House disc that Capitol would accept, a compromise ensued whereby Tim Finn joined the band in exchange for using his co-collaborations for the 1991 WOODFACE album.

An airy, upbeat collection featuring brotherly harmonies, WOODFACE nevertheless proved problematic for Crowded House's identity. Now three-fourths ex-Split Enz members, it blurred an already cloudy picture. Who was the front man? Seymour and Hester weren't exactly on board with the change either. Capitol once again made a curious lead single choice, going with Tim's "Chocolate Cake" -- an uncharacteristically snotty song criticizing Americans for being fat televangelism worshippers. An American band like the The Hooters might get away with that; but who were these guys? As Bourke tells it, "Cake" was a compromise, ultimately won out by those believing the band needed more traction amid a growing taste for "alternative"rock. But it was nobody's idea of the best song on the record, with a half-dozen others easily better, ranging from Hester's quirky "Italian Plastic" to folky ballads like "She Goes On," to the irresistable, Beatlesque "It's Only Natural." (Check out Shea Stadium in the video!)


They all whiffed here, although the album was a bigger hit in U.K. and in Australasia. Despite lifesaving contributions as a collaborator, Tim Finn was an odd fit with the band's character; abruptly dropped out during a tour and was replaced by American multi-instrumentalist Mark Hart, then touring with support act Sheryl Crow.

For all the understated elegance of Crowded House records, none to this point had captured the energy and spontaneity of its live shows, a point Bourke makes repeatedly in describing show after show (after show). With Neil relocated to New Zealand with his family, production for fourth album TOGETHER ALONE convened at exotic Karekare Beach with producer Martin Glover (aka "Youth") of the British band Killing Joke. Fueled by massive intake of pot and a haphazard approach that was the complete opposite of Froom's fussiness, TOGETHER took months to complete but stretched the band out musically, incorporating a psychedelic mix of Finn's Irish and Maori heritage complete with native drummers and a brass band. Now a fulltime member, Hart encouraged Finn to turn up the volume on a ballad morphing into the lively, tambourine-shaking power-popper "Locked Out" (from the 'Reality Bites' soundtrack) but the album's highlight is undoubtedly "Distant Sun" including all the elements of a Finn classic: it's a dreamy, melancholy love song with a verse just as strong as the chorus. McCartney couldn't do any better. It is glorious.

Buoyed by the emergence of the "Adult Alternative" radio format, "Distant Sun" peaked at No. 26 on the Billboard alternative charts and helped to melt an undeserved reputation as middle-of-the-road kind of band before the strain of touring wore the group out. Suffering a crippling depression, Hester packed up and flew home to Australia during a tour stop in Atlanta. The band carried on with a replacement, but Finn officially broke up the group afterward, and they completed their commitment to Capitol with a greatest-hits package. Considered national heroes in Australia they would reconvene with one-offs TIME ON EARTH in 2007 and INTRIGUER in 2010 amid various Finn solo albums and a second collaboration with Tim Finn.

Seymour joined the band Deadstar and continues to work from time to time with Finn. The bon vivant Hester took a role as "Paul the Cook" on the Aussie kids' TV show The Wiggles among other acting gigs, but he never beat depression. He took his dogs for a walk in Melbourne in 2005 and never came home. He was found hanging from a tree in a public park.

Bourke's anguish in telling that bit of the story is palpable, reflecting a book borne of unparalleled access (a New Zealand-based music journalist, he was there from the start) and his personal admiration for the band. At times it's a bit much for the casual fan to take in, but certainly worth a spin.

Posted by Jon Springer at 12:23 PM No comments:

Any Trouble were a quartet out of Manchester whose Stiff Records' 1980 debut, WHERE ARE ALL THE NICE GIRLS was jammed with lively, jangly, witty, irresistible new-wave pop AND a cool rockabilly cover of Springteen's "Growing Up." What more could you ask for?


The only track that casual listeners may remember was the reggae-influenced minor hit "Second Choice," promoted with a dull video in the early days of MTV that highlighted their shortcomings in visual appeal way more than it showcased their music. I'm sure the listening public got a load of these guys and figured they were a skinny-tie wearing Elvis Costello ripoff act with a shlubby balding singer who didn't even wear stylish eyeglasses.

Be that as it may, WHERE ARE ALL THE NICE GIRLS is just terrific. "Playing Bogart" one of the most unique and underlooked songs of the era (that song is actually a cover from an even less-known band known as 23 Jewels, I discovered). If there's a better young-guy-struggling-to-get-his-shit-together-before-you-go-out song I'd like to hear it.


A couple more albums with similar stuff and results, and Any Trouble were out of business by 1984. Singer and songwriter Clive Gregson went on to a successful career as a songwriter and performer in England but has reformed Any Trouble twice: Once for 2007's LIFE IN REVERSE, and just now for PRESENT TENSE.

A couple spins would suggest little has changed with the jangle-pop formula. Although at an hour and 10 minutes I haven't gotten to the end yet, and the lead single is a countrified tribute to Glen Campbell, it's pretty good.

Posted by Jon Springer at 6:55 PM No comments: