About this time last year, struggling amid a what-to-play-next crisis, I impulsively embarked on a plan to solve that issue by streaming every album on WXPN's "Top 885" all-time countdown, bottom to top. With the exception of a few handfuls of unavailable titles, and granting myself the option to play live albums, I tackled more than 400 of them this year, and I'm somewhere in the mid-300s now.

Given the scope of the project -- and the fact that the list itself was published in 2005 and so by definition pinned me back a full decade at least -- I didn't leave my ears a whole lot of time for new music discovery in 2015, and find myself even less familiar than usual with the contemporary year-end lists you see this time of year.

With a couple of exceptions I was tempted to listen to new stuff mainly in cases where I had at least some familiarity with the artist going in, and so as I review my favorites they're about as Dad Rock as ever. As I can't recommend 10, please enjoy selections from my top eight 2015 releases.

Robert Foster SONGS TO PLAY
The elderly singer of the 80s band the Go-Betweens comes off as an elegant Aussie Lou Reed jangle-rocker. Can't find an embeddable version of "Learn to Burn" but that's worth a listen too.

Frank Turner: POSITIVE SONGS FOR NEGATIVE PEOPLE
There's no denying Frank Turner knows how to write a rousing song, and this collection of 'em is an improvement on his last one but its getting to the point that I don't get what he's so stirred up about anymore. The weather? It's about half the record.

I detect Frank's "core" punk fanbase is dismayed at his increasingly listenable output -- writing lyrics to a song called "Get Better" all over his old album covers I think sends a message too -- but I'm looking forward to the day he's ready to truly abandon his roots, fuse that fist-pumping energy with some soul; swap out the barrelhouse pianny for a hammond organ, mandolins for horns, etc. etc. Still, this one fires you up!

The Front Bottoms: BACK ON TOP
Low-fi, funny-sad garage band with an incredibly expressive singer who manages to strain against the hopelessness at the heart of one catchy tune after another.

Franz Ferdinand Sparks: FFS
Churning out underappreciated, theatrical weirdness for 40 years, Sparks gets a jolt of new energy from younger collaborator Franz Ferdinand, themselves a bit of a quirky outfit I also like. A "pick any song" kinda record.

Joe Jackson: FAST FORWARD
Joe's first "new" record in seven years is actually a double-album recorded with four different bands in four different cities. So it's literally all over the place, but as well executed, well arranged, and well played as ever, and several are lyrically interesting particularly on the ruminative title track. I particularly the New York and New Orleans sides, the latter producing the Beethoven-inspired selection below. I'm ready to start a campaign to get Joe into the rock Hall of Fame.


Noel Gallagher's High Flying Birds: CHASING YESTERDAY
I admire the way the classic-rock ripoffs on this album are so plainly in sight. The very first song begins "There's something in the way she moves," while the one below borrows the melody and a lyric from David Essex's "Rock On." Other song titles include "In the Heat of the Moment" and "When the Song Remains the Same." About half of this album is great, and the other half isn't, but  that was enough for me this year.


J.D. McPherson: LET THE GOOD TIMES ROLL
This is the only guy on this list who was completely new to me this year, and I don't remember how I first encountered him, but this is fun stuff, 50s roots rock and a great singer with a dirty -- but not filthy -- edge.


Josh Ritter: SERMON ON THE ROCKS
Reflective, wordy, literate and sometimes funny, Josh Ritter captures both the golden light and chilling shadows of Autumn. There's some fire-and-brimstone -- opener "Birds of the Meadow" is creepy and "Henrietta, Indiana" is bleak -- but the same themes of religion and small-town folk are tackled joyously on "Getting Ready to Get Down," and "Cumberland" later on in the record, and all of it is interesting, listenable and evocative.

Here's a little more:
Posted by Jon Springer at 5:35 PM No comments:

You Really Got Me Now

If the Beatles' crucible were the rough-and-tumble clubs of Hamburg, Germany, Van Halen's were poolside backyards in sunny Pasadena. Greg Renoff's new book VAN HALEN RISING puts the reader in the crowds of teens paying $1 admission for illicit outdoor keg parties where an ascending Van Halen provided the entertainment, and forged its spirit.

An immersive, well-researched tale of pre-fame trajectory, VAN HALEN RISING also makes a convincing case for how revolutionary they were upon arrival — a conceit that's easy to overlook beyond the considerable chops of Eddie. 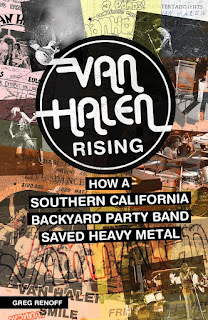 The Van Halen family arrived in California as Dutch immigrants in 1962 with little more than a piano to their name. Father Jan worked as a jazz clarinetist in Europe and followed relatives and a vague promise of opportunity to California, settling in working-class digs in suburban Pasadena.

His two sons, who didn't even speak English when they arrived, dutifully took piano and violin lessons until their restlessness for experimentation became too great and they morphed into aspiring rockers. Drummer Alex and guitarist Edward fronted a variety of cover bands playing under names like the Broken Combs, Trojan Rubber Company, Genesis, and Mammoth. The latter two names would be retired upon learning that other bands went by the same handles: The eponymous surname they eventually settled upon, Renoff reveals, came not from them but from an influential new frontman.

The Van Halens and David Lee Roth first came across one another as musical rivals, and they could not have been any more different. The son of a wealthy ophthamologist, Roth pursued stardom as obsessively as Eddie pursued guitar. Drawn to what he recognized were the area's best musicians, Roth auditioned to sing for them only to be rejected — twice. Undeterred, Roth eventually wormed his way into Mammoth against the better judgement of its existing members, in part by relieving Eddie of unwanted lead vocal duties, but mainly by possessing a PA system they needed to gig. Using the PA as leverage, Roth would at times loan the equipment in exchange for a chance to sing and others just as an excuse to hang around. When they could no longer stand to be in Roth's debt, they surrendered and made him the singer. Renoff calls this "the greatest rock and roll power play of all time."

Then a cover band noted for their ability to deliver note-for-note renditions of heavy rock classics, Mammoth were an odd fit for Roth, whose influences included cheeseball crooners like Louis Prima and whose tastes leaned toward Motown, glam and funk. Beyond that, he wasn't anyone's idea of a good singer. But his influence was a crucial ingredient in the Van Halen formula, Renoff notes. He got the band to lighten up on plodding, blues-rock jams and aim instead toward tight, melodic rock you could dance to. He convinced them to cover songs like Billy Preston's "Will it Go Round in Circles." He also injected the band with a sense of style, encouraging his bandmates to adopt flashy stage clothes instead of the jeans and flannel shirts they typically wore.

This new approach also required the band improve their singing, leading to the addition of bassist Michael Anthony. Anthony, whose soaring background vocals would become another distinct element of the Van Halen sound, proved to be "the final piece of the puzzle," Renoff writes.

As Van Halen graduated from backyard jams to club dates it had several brushes with success — most notably a doomed come-on from KISS' Gene Simmons who not surprisingly had per$onal goals in mind. But in a time when metal was dying, disco was soaring, punk was coming, and California was still exporting soft-rockers, the notion of breaking a heavy rock act was considered a longshot by the industry, and several labels passed.

In the end, talent won out. Ted Templeman, a house producer for Warner Brothers whose clients included both heavy-guitar acts (Montrose) and three-part harmony singers (the Doobie Brothers) caught them at an LA showcase. "I saw Ed and I was fucking knocked out," Templeman tells Renoff. "He was the best musician I'd ever seen in person." 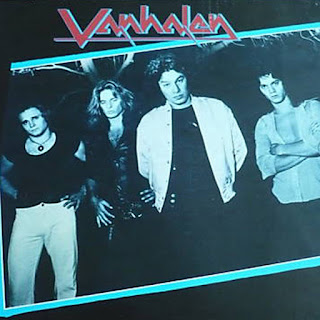 Still, Van Halen was a hard sell: Templeman was careful to present them first to Warners' open-minded president Mo Ostin as opposed to its chief A&R man, Lenny Waronker, at the time a leading advocate of the soft-rock "L.A. sound." And as the label prepared for the release of their first album, members were horrified when an early version of the cover packaged them as though they were a punk band.

Renoff's case for Van Halen as rock revolutionaries was made not only by its fresh sound profile -- hard-hitting riffs with melody and vocal harmonies, accompanying Eddie's stunning virtuosity -- but also by the tours in support of their debut album. Aging metal masters Black Sabbath purposefully selected Van Halen to open a 1978 tour for them with the idea that casting an unknown would keep the fans' focus on them, but the scheme backfired spectacularly as Van Halen shocked one audience after another, while brashly going toe-to-toe with any musicians who'd outparty them. The tour so demoralized Black Sabbath that singer Ozzy Osbourne would soon set off on his own, and as the record took off -- peaking at No. 19 on the Billboard charts, but destined to stay in the top 200 for 169 straight weeks -- hard rock was the never the same.

Renoff ascribes the subsequent success of platters like AC/DC's BACK IN BLACK, the Scorpions' LOVE AT FIRST BITE and Judas Priests' SCREAMING FOR VENGEANCE to the cultural breakthrough of Van Halen. While Van Halen were never a "metal" band per se -- Roth preferred the term "Big Rock" -- they influenced the genre with bands like Priest, KISS and others shamelessly borrowing their best tricks, while a generation of young guitarists had a new hero.

Posted by Jon Springer at 5:25 PM No comments: