Carol Miller spoke to me in bed. She worked the 10 p.m. to 2 a.m. shift at WPLJ in New York when that station was the only way I knew to grip onto what was new and cool in the world. 'PLJ ran a tight but lively "album-oriented rock" format that though lacking at the extremes provided a fairly well-rounded education in the basics from the British invasion to this New Wave thing before the format tightened still again and finally became a casualty of the "contemporary hits" format in June of 1983. 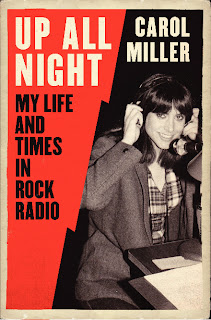 Writing in her new book UP ALL NIGHT, Miller reveals that she did not survive that format switch for long because the equity she'd built as a sultry-voiced, puberty-triggering, Zeppelin-blasting rocker all those nights couldn't translate to credible spins of Madonna and Lionel Richie. And so she washed up at PLJ's old rival WNEW (where she briefly was employed before her starmaking turn at PLJ) and rode those nighttime airwaves for another few decades. These days, she accompanies me on my night runs, still playing Led Zeppelin and Springsteen, still sexily baffled by reading the sports scores, on the banal but dependable WAXQ, New York's last rock n' roll station and the spiritual descendant of her former employers. Rock Lives, a little.

While the dust jacket promises salacious tales of torrid affairs with rock's elite, we learn Carol's not that kind of girl. The oldest daughter of a conservative Jewish family from Queens, she remained wide-eyed and naive despite the inevitable (but tame) encounters with the Paul Stanleys, Steven Tylers and Rod Stewarts of the world. Her marriage to MTV's Mark Goodman -- back then, a royal coupling -- was a disaster as she learns Goodman not only was cheating on her, but using her money to finance his affairs. What a dick! Carol in the meantime was dealing with the beginnings of what would become a lifelong battle with cancer that's required dozens of surgeries, and she battles still today. I had no idea.

While not particularly interesting from a musical standpoint, UP ALL NIGHT is best giving us a peek at the other side of the mic, and her story provides unexpected lessons in the value of perseverance, surviving not only the collapse of the radio and rock industries, but personal trauma too. I love her more than ever.
Posted by Jon Springer at 7:21 PM