He Is The Entertainer

I've written before about my complicated relationship with Billy Joel, who meant a lot to me when I was very young, but whom I rejected along with most everything associated with Long Island as I got older and worked a little too hard to be cool.

The time to scratch that itch for real came about this week when I finally cashed in the birthright of millions of my neighbors and saw the man perform a sold-out show at Madison Square Garden. There was something more satisfying to having "won" our tickets by bidding on them at a PTA auction for our son's school; it felt good to contribute but as it turned out, the seats were donated from the "band friends & family" pool and so we learned as we entered we had excellent seats in the lower bowl, very close to the stage.


Until now I'd only seen him riding his bike around Huntington and getting ice cream with Christie Brinkley at Baskin Robbins while they were still secretly dating 40 years ago. 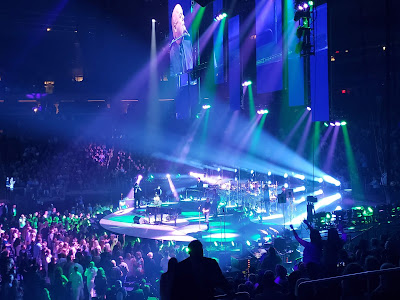 Billy is front and center with a grand piano on a rotating platform. His seven-member band of course is top-notch; we'd seen Mark Rivera (sax, tambornie, vocals etc) lead the "Breakfast w/ the Beatles" band before. The guitar player, Mike DelGuidice, was an excellent singer who did some Zeppelin snippets (Kashmir, Rock n Roll).

We got a kick out of all the dressed-up Long Island Moms in attendance.

Just like the outstanding SONGS IN THE ATTIC, recorded on the same stage 38 years before, he opened with a stirring "Miami 2017" and we were off.

Billy was in good spirits and good voice, mentioning he'd just turned 69 ("I used to like that number."). My brother, who used to work at the Garden tells a story of watching Billy rehearse a show as part of his Elton John tour years back only to get so drunk during the course of the day he couldn't go on that night, but Billy is apparently clean and sober now and whatever he was drinking came out of a mug. He dedicated "Don't Ask Me Why" to a little girl in the audience I guess was a granddaughter seated near us. The first half of the show was what he called "fielder's choice," letting the crowd choose which of two songs off various albums they would perform. I won with "Vienna" (over "Just the Way You Are," thank the lord, and with "Zanzibar," (over "Stilletto"), but lost big time with "She's Got A Way" (over "Everybody Loves You Now"). I cheered for "Root Beer Rag" over "The Entertainer" but the latter was performed and turned out to be one of the better selections on the night.

It's Fleet Week here, and so as "Goodnight Saigon" starts a dozen uniformed sailors come out on stage and sing the chorus arm in arm. It was cheesy but the audience loved it and learned the True Meaning of Memorial Day. That's as political as Billy dares to be. I would have liked him to rip Trump a new one and challenge his fans in a new verse or two of "We Didn't Start the Fire" but Billy hasn't bothered. Twenty-five years without a new pop album!

I mentioned this to my friend Edward who in no time had penned a clever suggestion:

Ronny Jackson says "Great shape!" Mueller, find the pee-pee tape
US Nazis, they're so fine, Putin is a friend of mine
Fuck our allies from the West, Mexico don't send the best!
Sheriff Joe gets a pardon! DAUGHTER GIVES ME SUCH A HARD-ON!

Give it a shot, Billy. If I can change, you can change!

The hard bargain of the Billy Joel MSG phenomenon played out as he totally went "back wall" with "Stop in Nevada" off PIANO MAN and folks went flying to the men's room and hardly any remaining audience members even applauded. I thought, do you need to hear "New York State of Mind" again? Me, I got up and peed for "Italian Restaurant" -- another chestnut beaten into banality for me by way too many classic-rock radio spins.

I enjoyed the three-sax chorus in "Movin' Out" and the brass was activated again for "Half A Mile Away," which Joel described as a "fukuka" song the band had never before performed live. I could barely believe that was true; in my Southside Johnny-influenced youth that was one of my favorites. "I Go To Extremes" on the other hand came out after I'd already decided Billy Joel was the uncoolest guy ever and would never listen to him again on purpose, but everyone including me enjoyed that one quite a bit.

After a while I feel into a spell thinking how much of Billy's Winning Streak material was just ripped off stylistically from others, performing the one he ripped off from the Cars ("Sometimes A Fantasy") and the one nicked from Graceland-era Paul Simon ("Middle of the Night"). Billy to his credit never considered being "derivative" a criticism. I guess we all have a idea of what Billy Joel ought to be (for me the post-singer-songwriter, pre-superstar TURNSTILES is the ideal) but he is what he is. There was just no way to stop him from playing Side A of his Greatest Hits at the encore.

He is The Entertainer.

Don't Ask Me Why
Vienna

Encore:
We Didn't Start the Fire
Uptown Girl
It's Still Rock and Roll to Me
Big Shot
You May Be Right
(with "Rock and Roll" (Led Zeppelin) snippet)

Posted by Jon Springer at 8:01 AM No comments:

As far as I can remember it, that was the parody "letter to the editor" published in a mid-80s copy of the National Lampoon we had in the dorm room. I miss this kind of savage comedy today even if it took an unfair shot at Greg Kihn, whose career didn't really go nowhere. You might call him a "two-hit wonder" but that's not really accurate either. He wrote two songs you'll never forget, several other near-hits, and you probably also know his album titles were all puns based on his name. 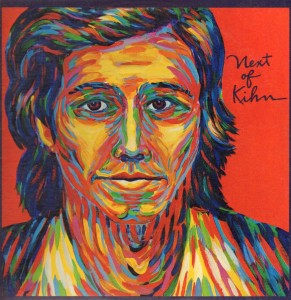 Or so I thought. It turns out there were more Greg Kihn albums (most credited to the Greg Kihn Band) than I ever knew and not all of them came with a punworthy title. As I went back in time to listen to them I was somewhat disappointed to learn that he'd flirted with the idea, then dropped it, only to resume it in time for his midcareer breakout then lose it again.

Greg Kihn was born in Baltimore, though came into his own after moving to the Bay Area. Having grown up amid the British Invasion, its not surprising to learn he would come of age in the first wave of Power Pop artists, though Greg was by no means a purist; he was a stylistic borrower who had no problem mixing in the odd 50s style ballad, folk-rock, reggae beats, soul covers, keyboard-driven dance pop, and Springsteen Lite to his pop-rock core. He was considerably more mainstream than Beserkley labelmates the Rubinoos or especially the Modern Lovers. 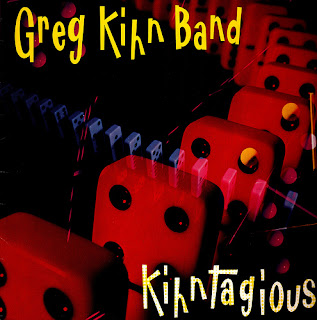 The Greg Kihn Band was established following a self-titled singer/songwriter debut, and spanned most of the era: bass player Steve Wright; drummer Larry Lynch; guitar player Dave Carpender; and keyboardist Gary Phillips. Wright co-wrote a number of songs with Kihn including "Jeopardy" and 'The Break-Up Song." Wright also took lead vocals on some album tracks, as did Lynch.

Kihn made a lot of records. Exactly one every year for 11 straight years, 1976 to 1986. The good stuff was generally pretty good, the less-good stuff wasn't awful, and most of it presumably sounded better on stage than on record, since until MTV came along and a string of "concept videos" made him a kind of star, touring was the only alternative to Burger King.

I was inspired to go back and listen to the Kihn Katalog due to my admiration for an odd non-single, "Madison Avenue Man" buried on Kihn's second album, GREG KIHN AGAIN. I like everything about this song: starts off as a bush-league "Day In The Life" cowbell-clanger, then suddenly springs to life with an irresistible chorus straight out of "Ricky Don't Lose That Number" and goofy lyric I guess pokes fun at the music biz "Let me touch your money with my Madison hands."

Kihn was also among a group of 70s artists who recognized Bruce Springsteen's burgeoning songwriting chops sooner than most. He covered "For You" (AGAIN, 1977) winning the Boss's own admiration and a BORN TO RUN outtake, "Rendezvous" (WITH THE NAKED EYE, 1979). The guy had taste.

"The Breakup Song" (ROCKIHNROLL, 1981) hit No. 15; and the danceable "Jeopardy" (KIHNSPIRACY, 1983) went all the way to No. 2, but couldn't beat "Beat It." Beserkley folded following 1984's KIHNTAGEOUS, but he Kihn-tinued under EMI with the the very 80s sounding and solo-credited CITIZEN KIHN (1985), then got the band together again for LOVE ROCK N ROLL (1986). The latter two appear to be whatever the streaming-era equivalent of "out of print" is although you can still find some videos online.

Kihn became a deejay and part-time horror novelist following his run on the pop charts, and a year ago put out a new record that may or may not prove they write 'em like that anymore, but to celebrate the harmless, punmaking, reliable rocker here's a playlist with one handpicked track from each of his 9 Beserkley platters in the 76-84 Kihn Dynasty.

Posted by Jon Springer at 5:59 AM No comments: