I can't say these records are necessarily the "the best" of 2012, since perusing the year-end lists from critics and fellow music enthusiasts indicates how little new stuff I actually heard this year, in part because for all the listening I did much of it was focused on reconsidering music that was either 30 years old or 50 years old. These little projects were worthwhile endeavors in their own right, but by definition they competed for my attention with new stuff. That which broke through for me was further warped by my perspective, which is a way of saying I probably devoted more attention to artists and genres I already liked, but still some of this was challenging too.

Here are 10 I especially liked this year no particular order.

Rosco Bandana: TIME TO BEGIN
These guys have a B-52s vibe happening if they were hippies. Bouncy.

Bruce Springsteen: WRECKING BALL
Not sure I approve his taking on an Irish accent to sing "Death to My Hometown" but I found "We Take Care of Our Own" to be absolutely stirring, sizzling with rage behind patriotic double- and triple-entendres, bright arrangements and a melody recalling that Cure New Order song. Really, a better job than "Born in the USA" here.

Paul Weller: SONIK KICKS
This album was a real grower. I found all the electronic bleats and blatts as an overpowering distraction until I came across a video of an acoustic performance that helped me appreciate their role as attention getters that complement and contemporize songs that are very strong even without them.

Ben Kweller: GO FLY A KITE
I challenge you to find an easier album to like. Effortless smiling country-tinged powerpop.

Brendan Benson: WHAT KIND OF WORLD
Smashing power-pop from Jack White's Raconteurs partner. I liked White's album too but I listen to this one more.

David Myhr: SOUNDSHINE
Swedish pop genius. Unlike some consciously retro bands (Explorer's Club) that try too hard, Myrh comes off as a contemporary whose sensibilities truly are with 70s bands like 10cc and Pilot. It's a little sugary but good for you!


Graham Parker & the Rumour: THREE CHORDS GOOD
As a big GP fan I've been looking forward to this reunion (and the associated THIS IS 40 movie) for more than a year so when I heard it first I was underwhelmed. I guess I expected to be blown out of my chair but its strengths are really the slow burns, like this Pat Tillman waltz.

Chuck Prophet: TEMPLE BEAUTIFUL
Not a great singer but a very good rocker, all the way through.

The Moons: FABLES OF HISTORY
I didn't realize when I first stumbled onto these guys that it was fronted by a musician who played with Paul Weller, but it makes sense and lends some credibility to the idea that a mod revolution is taking hold at least among old white people like me. Anyway these guys sound like the Zombies and also, Wings.

Ian Hunter & the Rant Band: WHEN I'M PRESIDENT
I know I said "in no particular order" but I think this is my favorite this year. The man is 73 years old yet delivers a searing and timely "Occupy" inspired title cut and it's only the beginning of a fabulous rock record that sounds contemporary AND like a Mott/Hunter classic at the same time. I'd been on a bit of a Hunter retro kick even before this came out, feeling as though he was an artist who never truly got his due. That's more true today than ever.


There's more! Throughout the year I kept a playlist of what I liked as I came across it at Rdio. The following list spawned these cuts but this larger one works on shuffle. Thanks to my Rdio pals and blogs I peek in on for the help this year...

Posted by Jon Springer at 8:43 AM No comments:

I was sick with a persistent sinus/head cold and ran intermittently beginning in February, brought my miles back up too soon when I did get out and wound up with a very sore achilles tendon -- same injury that kept me off the road for months a few years ago.

Haven't run since a slow and painful performance in the Fiesta 5K in May, was definitely holding back and limped across the finish line, feeling as though something was tugging behind my right knee in addition to the sore achilles. Haven't run since.

Meantime, the lack of exercise and continued eating and drinking excess have made me feel (and look) really fat, especially at the thighs and spare tire, so much so I signed up this week for Weight Watchers. We'll see how it goes, I'm shooting for a seemingly reasonable 17-pound loss, which would take me to 175, where I haven't been for probably 15 or 20 years. It would also be a considerable help to my running if and when that gets going again.

The Trachsel Project soon after became a Mazzilli thing I'm at work on now. In the in between, coached the boy's tee-ball team which was a lot of fun and also a test of my abilities to within a weird organization and sometimes, difficult decisions.

Posted by Jon Springer at 8:13 AM No comments:

Who's Behind the Door

I was home from school faking an illness the day John Bonham died. As I recall it, the radio that afternoon was abuzz with a forthcoming tour announcement for the newly released In Through the Out Door LP when the news hit. The death (September 25, 1980, wikipedia says) would spell the end of Led Zeppelin and tear a giant hole in rock radio from which, for better or worse, it never recovered. It certainly hastened the end of the 70s, and provided a boost to the Punk & New Wavers coming from behind.

Then there were the bands who took up the flag for those who refused to move on. Zebra formed in New Orleans in the 70s but for a short period in the early 80s were H-U-G-E local heroes on Long Island, thanks largely to WBAB, which picked up on their Zepplinesque sound and advertised their constant Island gigging. Seemingly modeling every song after Stairway to Heaven's gentle acoustic start and jamming climax, Zebra also called to mind other trios like Rush (for the Plant-ish falsettos) and Emerson Lake and Palmer (for proggy synth flourishes and lengthy jams).

Back then, seemed to me as though there were Zebra fans, and there was anyone who'd heard Elvis Costello, and those groups rarely hung out together. I was solidly with the latter crowd and still think of Zebra with a little sense of slummy, douchey bemusement. I kinda like them but still have trouble admitting it. The band's 1983 "major label" debut album, which thanks to WBAB every kid on the Island knew by heart for years already, was reportedly the fastest-selling debut in Atlantic records history, but likely as a result of the changing times and a lack of variety, it never hit big nationally. Their second and third records seemed simply to rework their formula from the first, and that was that. Vocalist/guitarist Randy Jackson does the National Anthem at Mets games sometimes and some of their fans still haven't moved on, providing Zebra an open invitation to outdoor jams in Patchougue and reunion gigs at the Salty Dog for as long as they live, probably.

Posted by Jon Springer at 6:26 PM No comments:

Just me and the cats this weekend. Saturday, painted and hung the closet doors, did a 7-mile run, watched the Patriots-Broncos debacle at a sports bar with wings. Today, fixed the back door, cleared out the tool case, ran another 7 miles. More chicken, more football and Moneyball on DVD await. Listened to Springsteen yesterday (my Lucky Touch mix, plus for the first time probably, Devils & Dust, which I liked quite a bit).

Human Touch is an outstanding song but a rather lousy album; but I always liked Lucky Town. I bought both these albums for cheap at K-Mart in Elkton back in '92. Cassettes, since I listened in the car almost exclusively then.


Streaming The River now and remembering that although I owned this as soon as it came out in December of 1980 it was probably too much me at 14. For example, I rarely if ever played Side 4. I'm only now working at separating liking Springsteen because I was supposed to (my initial attraction was more about imitating my brother, who is 7 years older and also aligning my tastes with what I knew was critically acclaimed). It's a great record when you're in the mood for it, and though it was hard to slot in with its predecessors, there are pieces of 'USA' and 'Nebraska' all over it.
Posted by Jon Springer at 3:16 PM No comments: 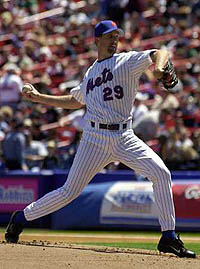 If I don't get to this blog this year I'd at least like to make progress once again on some neglected baseball research projects. Perhaps publishing the topics here will provide some motivation -- and a place to write down potential subjects when they come up.

Today I decided that in addition to my commitment to bio Terry Leach, I'd also like to write about Steve Trachsel. I also will need to make time in March and April to prepare for a presentation on Seaver for the Mets 50th anniversary event. If I get more ideas I want to write them down here. A goal of doing 10 bios this year might be a lot, but five ought to be doable. I found Trax's Facebook page.

Things really went whacky at Thanksgiving. Ate and drank too much and lost the momentum on the push-up and running. Very often any high point in running -- that fast 8K I did for example -- is followed almost immediately by a low period. I picked up the running again after some fear I might be hurt and/or bored, but I'm still feeling the extra weight I've been carrying around. Keep at it. Write. Do pushups. Follow through.
Posted by Jon Springer at 4:03 PM No comments: