Forgotten But Not Gone

What you have here just might be the greatest New Wave album of all time, and one of the most unusual to boot. 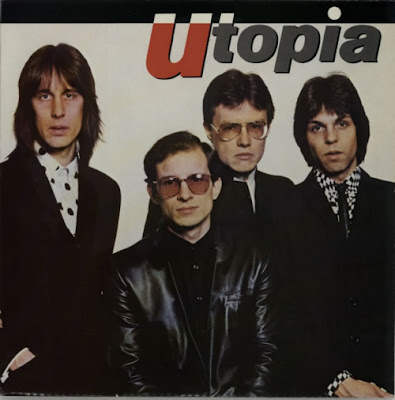 It came and went in a flash in 1982, and despite a minor MTV video hit, is easily overlooked among the varied projects and complicated narrative of Todd Rundgren, including the entire Utopia thing. It was released on a label doomed to a quick death and featured a helping of 15 would-be power-pop classics spread over 3 vinyl sides - A, B, C and a blank side D. Weird.

The Utopia of this early 1980s era was a far cry from the early assemblages under the same name in the 1970s, with only Rundgren participating across its lifetime. Utopia initially was Rundgren's touring band accompanying the leader's "psychedelic" era, and its first album -- then under the "Todd Rundgren's Utopia" moniker -- saw them performing dense, progressive songs including a single 30-minute song ("The Ikon") that ate up an entire album side.

Rundgren, described by some as a "genre tourist," never stayed in one place for long. He and Utopia gradually morphed from a prog outfit into a tight, pop-leaning quartet (Rundgren, McCartneyesque singing bassist Kasim Sulton, drummer John "Willie" Wilcox and keyboardist Roger Powell) with a goofy sense of humor where each of its members contributed songs and vocals. Powell dated to the psych era; Wilcox was Hall & Oates' drummer who joined following Rundgren's production of their WAR BABIES album; and Sulton was an up-and-coming player with Cherry Vanilla.

ADVENTURES IN UTOPIA (1980) bridged Utopia's evolving sound profiles with an album generating a few arena-like FM radio hits like "Caravan," the title track and Sulton's "Set Me Free" but that vibe didn't last either when they followed up with DEFACE THE MUSIC, a poker-faced pastiche of the Beatles where each and every song was a recognizable take-off of pre-1966 Fab Four classics.

By then quite busy serving as Rundgren's go-to backing band on a variety of his big and not-so-big production work (Meat Loaf's BAT OUT OF HELL for one, teen idol Shaun Cassidy's bizarre reinvention attempt WASP for another), Utopia drew well on the road but didn't sell many records, in part because the prolific Rundgren released slightly-more successful solo albums for each Utopia effort.

Bearsville Records was reluctant to pull the trigger on Utopia's next album, SWING TO THE RIGHT, a collection of off-kilter political pop-rock inspired by the dawning of the Reagan era. Utopia fled to upstart Network Records to establish itself again with the self-titled album reviewed here just as Bearsville relented and released SWING, resulting in a two-and-a-half new Utopia albums hitting shelves within months of one another, crowding a market that already had little appetite.

But if you could forget all that and just consider the album, UTOPIA was a stupefyingly taut, magnificently manufactured effort in which Utopia offered 15 variations on the three-minute, keyboard-and-guitar pop song, divided the songwriting and lead vocals in four easy pieces, harmonized beautifully and wrote particularly snappy lyrics making nearly every song a gigantic, awful pun. It wasn't exactly great art, but it was everything New Wave aspired to be.

Opener "Libertine," sung by Sulton, is one of the best rockers on the record, and should have been a hit. Others in that vein include "Princess of the Universe" sung by Wilcox, and Powell's ridiculous "Burn Three Times" which tells a lust story via awful kitchen metaphors: "I'm no Burger King/I'm no pizza pie spinner/It's a gourmet thing/not a TV dinner."

Rundgren's "Hammer in My Heart" -- an irresistible older cousin of his forthcoming solo smash "Bang the Drum All Day" -- was a minor dance floor hit based on the exact rhythm Utopia had laid down for Cassidy's bomb of a "Rebel Rebel" cover off WASP:

Wilcox's beat also anchors the psychedelic rave-up "Infrared and Ultraviolet" in which Rundgren and Sulton harmonize over the swirling noise of Powell's keyboards. "Chapter and Verse" "Bad Little Actress" "There Goes My Inspiration" "Neck on Up" and "Say Yeah" are jammed with power hooks and stuffed with silly metaphors. There's also a requisite Rundgrenesque ballad -- "I'm Looking at You But I'm Talking to Myself" -- and the country-ish "Forgotten but not Gone."

For pure goofiness it's difficult to beat the Powell-sung "Feet Don't Fail Me Now" and accompanying "state of the art" comedy video that early survivors of MTV should remember fondly.

Network Records folded only months following the release of UTOPIA and the band was largely forgotten when Rundrgren's EVER-POPULAR TORTURED ARTIST EFFECT solo album of 1983 produced "Bang the Drum All Day." Utopia hung around for a few more platters: OBLIVION (1984) and POV (1985) but they didn't have quite the spark.