A Little Rockin' Record I Want My Jockey to Play

While lots of my childhood friends intended to be musicians, some even succeeded, my secret desire was to DJ. Pat St. John, who worked afternoons on my beloved WPLJ, was about as cool as they came: Great voice, with what I realized later was a Michigan accent, and even within the tight confines of PLJ's "AOR" format, he always made you feel as though you were hearing just what he wanted to play.

The WPLJ I knew and loved has been dead for more than 30 years but I was pleasantly surprised to come across Pat doing weekend shifts on CBS-FM, the erstwhile "oldies" station. 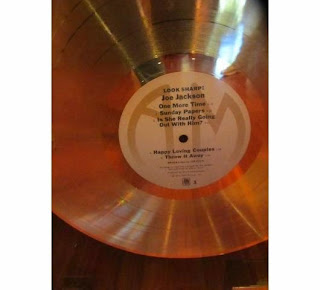 That gig too ended just recently, as word came that St. John was headed to California to be a full-time grandfather -- and continue a part-time satellite radio show from a home studio. So while most of New York is (rightly) mourning the end of Vin Scelsa's career, here's a little shout-out to Pat St. John.

St. John's departure by the way accompanied an estate sale I didn't attend, perhaps luckily, because I probably would have bid my retirement account for the Joe Jackson gold record pictured here. Pat's final show on CBS, which I also missed, was said to have concluded with the extended version of his clever WPLJ "montages" which used bits of songs to tell a musical story and promote the station and its jocks. I loved to hear these come around as much as any single song, and in their own way taught me how much fun music can be. If these don't make you smile I don't know what will (the below two hosted by Pat's colleague Carol Miller, whom I wrote about here).

Thanks a lot, Pat. You were great.