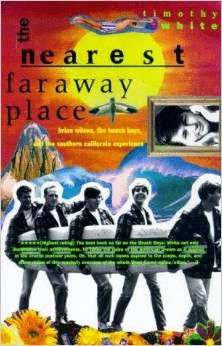 Pretty cool! A listening project I joined with some of my friends at Rdio was gathered together, edited and turned into a very readable and entertaining post spanning the career of the Beach Boys, published this morning on Modern Superior, "Toronto's premier podcast network and blog for content featuring comedy, pop-culture, film, craft beer, general nostalgia, music and more."

I meant at some point to get around to writing about the experience here but the idea came from my Rdio pal Dave Roberts and involved tackling one Beach Boys album a day for a month, or until they were done, to mark the 50th anniversary of the band. I got into it while concurrently reading Timothy White's excellent bio, THE NEAREST FARAWAY PLACE, which tells a comprehensive tale the sad and troubled family at the heart of so much great original American music.

As I relate in the remarks, I arrived in the Beach Boys story as the ENDLESS SUMMER compilation of 1960s hits arrived in my sister's record collection when I was a 4th grader. I was an instant fan but it was a mixed blessing for the band which at the time saw attention including mine diverted from their own efforts to stretch out musically. This so-called "progressive" period under Jack Rieley's management (roughly, the SUNFLOWER to HOLLAND albums) was something of a revelatory listen for me, and only reinforces the sadness of witnessing the group's spiral into the cruise-ship band they'd become by the 1980s.

Author Dan Gorman of the Modern Superior piece put together the below playlist of obscure but very listenable Beach Boys tracks: