Dee Snider probably doesn't need 400 pages to convince anyone that behind the lingerie and stage makeup he's just another kid from Long Island with oversized ambition and bravado but you also shouldn't be surprised that he uses them all. 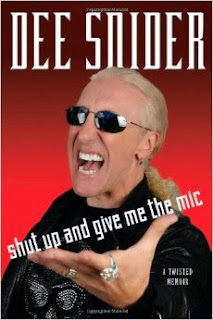 His new-ish biography SHUT UP AND GIVE ME THE MIC tells the story of Dee from his high-school choir to Twisted Sister's rise and fall to whatever it is he's doing today with plenty of good humor, a lot of shout-outs to those who helped him along, and a little bit of the obligatory score-settling.

Twisted Sister, we native Long Islanders know better than most, wasn't just a short-lived 80s phenomenon but the product of years of reaching for the stars that culminated in a brief moment in the MTV spotlight. Some of the best stuff in the book concerns Twisted Sister's ambition to go beyond the local club scene when they didn't really have to: In the 70s and early 80s, Dee writes, being a popular band on the New York club circuit -- Rumrunners, Detroit, Hammerheads, Speaks, My Father's Place -- was a living in itself. Twisted contemporaries like The Good Rats (a heavy rock-jazz combo whose late vocalist Peppi Marchello sounds like a Dee Snider forefather) chose to remain local heroes instead of chasing the big time mainly because it was easier on their schedules and families while still affording them the sports cars and the good life, Dee contends.

Break through at your own peril. Twisted Sister futzed around with various glitter-rock looks and sounds before hitching onto the so-called "New Wave of British Metal" and modest success as the genre's American import and pet of Motorhead's Lemy Kilmister. Back in the USA, they secured a deal with Atlantic but resisted when the label assigned them producer Tom Werman despite the massive success he'd have with STAY HUNGRY.

Snider contends Werman robbed the band of its heavier character but at the same time he makes no apologies for imagining Twister Sister as a vehicle that would bring "metal to the masses." His songs in the meantime pandered blatantly to children and teens, and the associated videos, casting ANIMAL HOUSE actor Mark Metcalf completely out of context, bore still more markings of a disposable gimmick band.

Naturally, Snider was too busy counting the money to take notice, much less heed the advice of his own STAY HUNGRY mantra, and plowed into the much more expensive, much less successful COME OUT AND PLAY in 1985. By this point the band was fracturing -- you don't get the sense that Snider and Twisted founder Jay Jay French were ever particularly close, while bassist Mark "The Animal" Mendoza and guitarist Eddie "Fingers" Ojeda resisted the whole popularity grab -- although what was to be a Snider solo album was recast as the even less successful LOVE IS FOR SUCKERS in 1987. That really killed the band.

Dee's obviously a bright guy but hardly a giant. He reminds us often that he possesses the gift of being able to create on the spot, yet also confesses that every song the casual fan will ever know of Twisted Sister (The Price, We're Not Gonna Take It and I Wanna Rock) were written in a single day. His witty and courageous standing up to Congress amid the PMRC hysteria was admirable but won him little regard. His fame stuck around but his fortune was gone within a few years, necessitating a Chapter 11 filing. He moved out of Howard Stern's neighborhood, and eventually, back into the working-class Long Island from which he came.