It's written in the book -- a new autobiography detailing his ascension from prog-rock drummer to mawkish 80s celebrity to a seemingly bitter industry dropout. 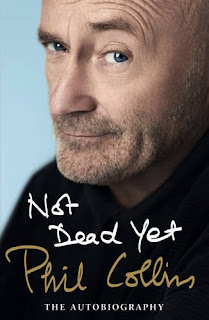 As NOT DEAD YET reveals, Phil Collins' enthusiasm for just about everything and everyone he encounters is endearing and genuine but leads him obliviously into one project after another his public image could have better survived without. In just about every case -- launching a Big Band with Tony Bennett, blurring and then erasing the distinctions between himself and his band, Disney soundtracks, a Broadway show, MIAMI VICE appearances, Royal Family charity hobnobbing, guesting on whatever, producing whomever-- his decisions invariably come down to asking himself "how could I say no to that?" That could be the title of the book, in fact.

Phil's not exactly apologizing for having overexposed himself -- to us at least. The years of sold-out stadiums and bazillion selling records in his wake would suggest he did us all a favor. Phil instead saves the regrets for his family -- three wives and a half-dozen neglected kids -- and for own health, ravaged by too many loud shows, too many steroid shots to save his voice and finally, to alcoholism that replaced his workoholism.

Phil Collins grew up in Hounslow, West London, and was a performer from the start. A toy drum he receives at Christmas when he's three years old "is the gift that keeps on giving," he writes. At 13, landed the role of the Artful Dodger in a West End production of OLIVER!, enrolled in a performing arts school, and was cast as an extra in A HARD DAYS NIGHT, but regretfully recounts how his appearance was left on the cutting room floor.

As a teenager in mid-sixties London, Collins absorbs the musical revolution around him. He gets a job sweeping up the Marquee club in Soho, where as a side benefit he's a witness to early performances by the Who, Yes, and the Yardbirds including the debut appearances of both Jeff Beck and Jimmy Page. His own musical apprenticeships include a variety of resort cover bands, R&B combos, original acts, unsuccessful auditions for Robert Palmer and Manfred Mann and finally, a doomed recording session at Abbey Road for George Harrison's ALL THINGS MUST PASS to which Collins devotes a funny chapter of youthful self-laceration.

In the summer of 1970, Collins responds to a classified ad and finds himself at the country estate of the Gabriel family, whose son Peter fronts a band of "immaculately bred" wealthy boarding-school mates called Genesis. He's the fifth drummer in the short history of the band, which already has two albums to its credit, and his outgoing personality -- and ability to sing background -- proves a valuable fit for the otherwise buttoned-up, ambitious and cerebral quintet. 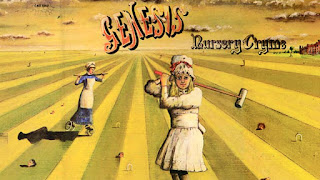 Genesis make a series of well-regarded prog albums and Gabriel's surreal performance art becomes a focus of their live show but the leader departs for a solo career in 1975. Collins makes it clear he was not anxious to replace Peter himself, saying he'd prefer to perform as an instrumental quartet than sing -- but after hundreds of inquiries and more than 30 auditions, rehearsals with Collins as the interim lead vocalist, and the strength of the material making up the embryonic A TRICK OF THE TAIL record are convincing. Collins will disappoint those who were hoping to see mud slung between the past and future Genesis vocalists; he professes they share a mutual professional and personal admiration from the beginning. Phil likes Peter; he seems to like people in general.

The departure of Gabriel affects the Genesis sound in other ways, freeing up Mike Rutherford and Tony Banks to pursue pop songwriting only hinted at in Genesis recordings until then. "They've always wanted to write like the Kinks and The Beatles," Collins insists. This becomes evident when "Follow You Follow Me" off ...AND THEN THERE WERE THREE... becomes an international hit in 1978 and starting with DUKE in 1980, the trio-era Genesis peppers the pop-rock charts for years to come.

Collins owes his big-bang as a solo artist indirectly to his first wife Andrea, a one-time high school sweetheart and mother of his oldest son and adopted daughter. While Phil was out touring with Genesis, "Andy" took up with a decorator at their home, and Phil poured the ensuing heartbreak into home-studio experiments that became the basis of the FACE VALUE LP, including the explosive "In the Air Tonight." That song's enormous drum sound was arrived at so as to preserve the intimacy of the home-studio recordings through producer High Padgham's "gated reverb" technique, ironically first used on a Gabriel solo recording with Collins drumming a year before.

Phil summons an eclectic set of his musical heroes to back him on FACE VALUE revealing his enthusiasm for American soul music that seeps increasingly into additional solo records -- the smaltzy HELLO I MUST BE GOING (1982) and the dance-focused NO JACKET REQUIRED (1985). Padgham is meanwhile on board as a producer for future Genesis records and they too include blasts of brass, artificial beats and pop/dance arrangements first showcased on the funky FACE VALUE. "We wanted Phil to do well," Tony Banks remarks, as a means of a backhanded compliment. "Just not that well."

The recordings make Collins and Genesis stadium-filling superstars and accelerate Phil's transformation into a kind of Elton John of the 1980s.  Suddenly, he's everywhere, getting back into acting, indulging a big-band project in which he manages to have artistic differences with Tony Bennett, and Disney's TARZAN movie and stage show. He plays Live Aid in London and in Philly, managing to piss off Led Zeppelin along the way. He quits Genesis, and scuttles a second marriage by trysting with another former high-school sweetheart, then takes up with a half-his-age third wife. This draws an enduring backlash that blunted any and all appreciation for his considerable versatility, innovation or work ethic. "I will hold my hands up and admit that, with all the success, it's quite possible that I've been giving off an unintentional smugness," Phil writes of the initial critical backlash. And when a note faxed to his second wife regarding their marital troubles gets into the hands of the press, they have a field day. How 80s.

Decidedly no longer in style or in much demand, Collins vanishes to Switzerland -- home of his on-again, off-again third wife -- only to reveal in surprising final chapters that he'd filled the creative void by becoming a falling-down drunk and embarrassment to himself and his family, and that injuries endured over a lifetime of performing left him partially deaf, walking with a cane and unable to operate a drumstick.

I was out running in the neighborhood a few years back when I came across these hipster yuks engaged in a ironic "tribute" to Collins that illustrated how dated and uncool he'd become in the eyes of young people. The embodiment of earnest Dad Rock from 30 years back seemingly had no place in modern popular culture except as a joke.

But there's always time for re-examination -- not surprisingly, the book accompanies a re-release of his solo albums and cites their importance by mentioning their embrace by contemporary hip-hop and R&B artists like Kanye West, Bone Thugs n' Harmony and Lil' Kim. Phil himself is forthright with criticisms of his work, but as the book ends, he's unwilling to necessarily pack it in for good. How could he say no?