Up There on the Platform

I was a freshman in college and must have been talking up, I dunno, Dire Straits or something when a much cooler guy in my class said "well, if you like guitar you should listen to Midnight Oil."

So I bought "10-9-8" and later RED SAILS IN THE SUNSET and was brought into the world. They mixed Twin-Lead-Guitar Action with power protest anthems, and were really creative in the studio -- big 80s productions and effects but also with a bar-band feel. RED SAILS in particular had an oom-pah band and didgeridoo and psychedelic surf guitar. It was out there.

Everybody caught on by the time the confident and tune-packed DIESEL & DUST came out in '87 and made them stars; Midnight Oil at that point to me had become an alternative U2: each had a charismatic, passionate singer and Big Rock guitar and were occasionally too much to take. I always preferred the Aussies, though I'd fall in and out of the mood for their stuff over the years. Often I forget their songs, and how many of them I know, until I hear them again, so it was a treat to be reminded of their terrific body of work in the live reunion tour that hit Webster Hall this week.

I was surprised how easily they got the crowd to bash right into it, cleverly opening with "Sometimes" which I remember as the last song on D&D. They are all in their 60s now and singer Peter Garrett looked the oldest of them, not quite the dervish he once was and to me occasionally looked to be sucking wind, not that he wasn't working hard. He eventually had the career in politics he almost had in the 80s that might have derailed the band: Their themes -- environment, race, nukes, globalism -- are remarkably prescient and vital today. Peter didn't shy away from pointing out the sad reality that the CEO of Exxon -- whose former 6th Ave. headquarters was the reluctant site of the Oils' most famous appearance in New York -- is today the Secretary of State. We need bands like this. 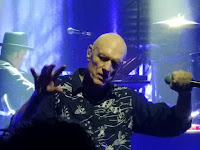 They more or less broke up a decade or more ago. It wasn't that they'd run down musically, but I think, the very idea of the protest song had become a quaint notion. I've pointed this out before. I'm happy to report nobody got fat, and the classic quintet are all still there (bassist Bones Hillman is the newest member but joined in 1987). Drummer Rob Hirst, who's also a great singer, is about as ripped as any 60-year-old guy I've ever seen. They brought him out front with a tiny kit to sing "Generals" and "My Country." They employed a multi-instrumentalist to fill-in on drums, brass and keys so they didn't cheat their productions, I appreciated that very much. 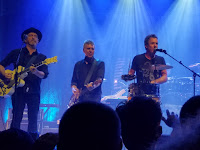 They played for about 2 hours including several "new" songs I didn't know well -- new meaning, post BLUE SKY. The highlight for me was "Warakurna" which I also think of as the blood-and-guts of D&D but I don't think was ever a hit, or I ever heard on the radio. Jangle, thump and a big sing-along: I seriously got emotional when they played it. They tried a cover of "Instant Karma" on the 1st encore but Peter forgot the second-verse lyrics.

My friend Kenny remarked the other day Midnight Oil might be the most underrated band of all-time and ought to be easy rock Hall of Famers, and it's hard to hard to argue either point. Here's hoping the tour, which accompanies a re-release of their catalog, reminds us. Who can remember? We've got to remember!

Who's gonna save me