I'll Get Back Up Somehow

It's all in a book I can't believe I just read, not to mentioned enjoyed a little bit -- albeit with the same guilty pleasure I get from some of his songs. 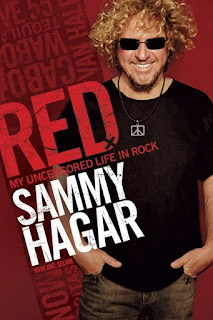 What I learned was the Red Rocker is possessed not only of extraordinary self-determination and confidence but a related inability to be discouraged or embarrassed when things go wrong. He's a happy-go-lucky and at times ridiculous star whose self-styled success is never really about hitting the right note, writing the perfect song or cutting a great album, but rather being at the right place at the right time, knowing the right guy, and making the right bets.

That he's become a resort restaurant magnate, millionaire and walking lifestyle brand for aging rockers all over provides an ironic contrast to his one-time bandmates in Van Halen who had a million things going for them musically but are basically incapable of sustaining successful lives.  Not that Sammy's bio is deep enough to point that out.

Sammy Hagar was born to a poor family in blue-collar Fontana, Calif., in 1947. His father Bobby was an abusive alcoholic and one-time prizefighter whom Sammy says once set the all-time record for being knocked down in a single fight -- 20. This and his mother's lesson in fighting off poverty forges young Sammy's determination. "Rock-and-roll and pussy," as he puts it, provides career aspiration.

At different times in the book Sammy confesses to wanting to be like Eric Clapton, David Bowie, Mick Ronson, Keith Richards, Mick Jagger, Rod Stewart and Jeff Beck but one way or another always found himself alongside serious guitarists, starting with Ronnie Montrose, whose eponymous band and influential first record Sammy provided vocals for (then a young veteran of regional bar bands, Sammy opines he got the Montrose gig because the leader was an egomaniac frightened that a star would upstage him).

Financial problems and acrimony between Sammy and Ronnie ends Hagar's Montrose run after two LPs, but the nation-rocking debut would only gain stature in the years to come (inspiring the Van Halen brothers, to name two). I predict the first relief pitcher who uses "Space Station No. 5" as warmup music will record 59 saves.

Though Hagar is fired by Montrose, some leftover songs find their way to influential manager John Carter and soon enough Hagar is on an album-a-year solo career and supporting his young family as a touring rocker, building regional followings in places like St. Louis, Dallas and the Northwest (he never really penetrated New York that I could determine beyond newsstand appearances in Circus and Creem). These albums from NINE ON A TEN SCALE (1976) through VOA (1984) mix melodic rock, some metal edges, cover songs and plenty of filler. None are huge hits, but each give fans at least a little of what they like. He's fortunate to be in the thick of it when MTV debuts and his distinct if inelegant visual style (red clothes, red guitars, frizzy blonde afro) was video-friendly from the get-go.

Why red? Well, as Sammy's not afraid to tell you he's got a special thing for red. Along with the number 9. He believes a psychic foretold his entire career. He thinks UFOs are out there and that aliens walk among us. This strain of prideful ignorance -- in combination with what my friend Edward describes as the rich-guy libertarianism behind the dumb protest anthem "I Can't Drive 55" -- gives off a Trumpian whiff that turns me off but helps to explain that "Red" state appeal.

Succeeding the legendary David Lee Roth at the front of Van Halen wasn't a job for the feint of heart but Hagar takes it in stride, knocking out the band's best-selling if not most loved album right off the bat in 5150. At the same time he's under no illusions that he can save the band from the brothers' unstoppable drinking habits (Testimony to Hagar's own use is more than a little inconsistent, though he comes off primarily as a recreational user). Some of the most compelling passages in the book describe Alex Van Halen's drinking excesses and  Eddie Van Halen's sorry state of physical and mental health that spoiled a 2003 reunion tour.

Roth by the way comes off as a jerk too, refusing to share the spotlight in an ill-fated co-headlining tour while both singers were on the outs with the brothers. Hagar in the meantime grows closest to sacked bassist Michael Anthony, who provides an eff-you to the Van Halens in the guise of a foreword.

Beyond proudly blowing hundreds of thousands on sports cars, Hagar's entrepreneurial nose has him investing in Fontana house-flipping, the mountain-bike business, a travel agency, airport restaurants, bookwriting (this bestseller from 2011 and an even newer cookbook) and a resort property in Mexico. The latter took some time to succeed, with Hagar buying out early co-investors Edward and Alex Van Halen, only to find them interpreting the whole thing as an elaborate scam once it blew up. "Cabo Wabo" made Hagar a millionaire many times over (his share in a tequila associated with the resort sold for $80 million) and turned Hagar into the Jimmy Buffet of headbangers.