A Bell In Your Head Will Ring

As I was saying, Todd Rundgren's a weird guy. An ambitious and prolific musical explorer whose 50-year output includes gorgeous Philly soul ballads, blistering guitar rock, dense psychedelia and prog, sugar-coated power pop, novelty songs, electronica, new-agey stuff, solo records where he played everything, bands where he was strictly a guitarist, you name it. Some of his work has been incredibly accessible, some barely listenable, some a little of both. 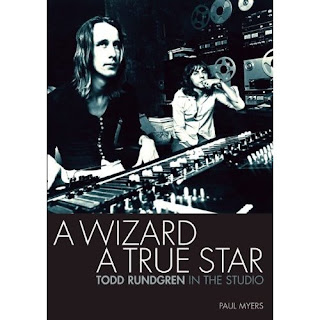 His parallel life as a producer and engineer for other artists is explored in Paul Myers' A WIZARD, A TRUE STAR, which argues for Rundgren's import in the golden age of rock studio recording, and details the steps Rundgren himself took to make such a job obsolete today. It is well-researched behind primary interviews with Rundgren himself and with many of the musicians whose albums he produced in the 1970s and 80s, with chapters devoted to albums produced for The Band, Sparks, The Psychedelic Furs, Patti Smith, Meat Loaf, XTC, Cheap Trick and others.

Though Myers' telling of the story is largely admiring of Rundgren's talents, the man isn't necessarily the hero of all of his stories. Musicians who have worked with Rundgren call him prickly, impatient and irritating, and at times describe frustration and tense disagreements in the studio. And like Rundgren's own musical career, their projects are a jumble of well-intentioned flops, surprise successes and shoulda-been hits.

As the book primarily focuses on the recordings Rundgren made, we get a brief introduction: Rundgren was born in 1948 in Upper Darby, Pa., was a disaffected teen with interest in technology, popular music and self-made recordings, and left home at 17 with a used guitar on his back. He joined and quit a blues-based jam band, Woody's Truck Stop, and brushed with success as a guitarist and songwriter with the Nazz, whose British Invasion influenced style was more up his alley.

Nazz made its first album in 1968 under a label-assigned old-school producer who had little interest in the project itself: While he was away, Myers writes, Rundgren would toy with the recording equipment, quickly developing a musical understanding of studio engineering. His curiosity -- and subsequent influence on the Nazz sound -- didn't sit well with bandmates and Rundgren departed the group to seek a behind-the-scenes job even before a second Nazz album could be released.

Rundgren found work as a house engineer and producer with legendary folk-rock producer Albert Grossman, and built a reputation as a "boy wonder" with a photojournalistic ability to pursue and then capture a sound even in difficult conditions: The Band, for example, was in disarray (drug use and internal disagreements) and didn't particularly like its young engineer's impatience and sarcasm (at one point, Levon Helm chased him from the studio with a drumstick) but Rundgren was able to guide its STAGE FRIGHT album to the finish line.

As noted, his projects were a mixed bag. Future hit-machine Hall & Oates' WAR BABIES was so free of anything resembling a hit it got them dropped from their first record label. Cheap Trick's NEXT POSITION PLEASE might be an overlooked gem, but it was overlooked for sure. On the flip side Rundgren developed a reputation for midcareer turnarounds for his work with Grand Funk (WE'RE AN AMERICAN BAND) and XTC (SKYLARKING), getting each of those bands unlikely U.S. hits.

He also took on unusual projects -- debuts for weirdos Sparks, the New York Dolls and an artist everybody passed on, Meat Loaf. Rundgren recognized BAT OUT OF HELL's theatrical grandeur, Myers writes, and brought it gloriously to life.

Myers shares tidbits from each of these sessions and reveals a few secrets along the way. Rundgren found the drum sound he was seeking when he placed his wallet on a snare drum during Sparks' debut recording. He encouraged Grand Funk to let drummer Don Brewer sing a powerful lead on "American Band." He strapped on a guitar and fiddled with amplifier knobs until he arrived at the "motorcycle revving" bit in "Bat Out of Hell." He papered over the vocal booth walls of Utopia Sound so that Psychedelic Furs singer Richard Butler could imagine it was night while recording within Rudgren's preferred daytime hours. He stood up to XTC's dictatorial Andy Partridge, choosing to record more of bandmate Collin Moulding's tunes for SKYLARKING than was typical.

If there was a signature Rundgren sound they can be heard on his 70s and 80s solo records and those of Utopia (multitracked harmony singing — Rundgren confesses Chorus was the only class he paid attention to in school; a taste for Philly soul and Beatlesque pop) — but also, a willingness to experiment with technology as demonstrated by pioneering video (he ran a spectacularly unprofitable TV studio); an "interactive" solo album the listener could choose to assemble at home under the TR-i name; and a charge into digital recordings that was ahead of contemporaries and hastened the demise of his own production career.