At some point in my mind, Steve Forbert and Willie Nile ceased to be distinct identities and merged into a single performer I remembered only as "Steve Forbert."

It was the turn of the 1980s, and both guys had shot out of New York as singer-songwriters, swimming directly against the current of punk and new wave. Each were delivered the "New Dylan" kiss of death, probably in the same article I'd read about them. Further conflating them was the fact that each of them had a minor radio hit in the form of a bight, jaunty moonlight serenade: Forbert's "Romeo's Tune" from JACKRABBIT SLIM reached as high as No. 11 in February of 1980;  Nile followed months later with the lead single of his self-titled debut, "Vagabond Moon."

Though not exactly dead ringers for one another, the thematic and aesthetic similarities were obvious and they became a single entity to me after both artists vanished from the popular landscape almost as abruptly as they arrived. Forbert had a bit more staying power -- he appeared as Cyndi Lauper's groom (Captain Lou Albano was the father-in-law) in the ridiculous "Girls Just Wanna Have Fun" video -- and spit out four albums before conflicts with his record label prevented him from releasing anything for more than six years. Nile sputtered out after a second effort, GOLDEN DOWN, tanked in 1981. 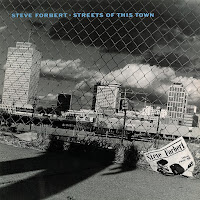 They had significant differences too. Forbert, originally from Meridian, Mississippi, came from the folk tradition and would make the majority of his career as an acoustic solo troubadour with a string of big-label near-misses and modest indy successes, just about all of them gentle, funny-sad ("Good Planets are Hard to Find") and confessional. Nile at heart was a swaggering rocker from Buffalo, and his best work would be while fronting a band in the tradition of a AAA Springsteen.

Forbert came back to me first, re-emerging on Geffen with the terrific STREETS OF THIS TOWN in 1988, produced by Springsteen's bassist, Garry Tallent. The cover, pictured here, tells you all you need to know. Inspired, I went back and filled in the blanks -- his superb debut ALIVE ON ARRIVAL, the neglected followups to JACKRABBIT, and made it a point to catch him live on several occasions. You can spin nearly any of his 16 albums and have an exemplary folk-rock listen, with the ocassional hootenanny.

It was 25 years before Nile reappeared to me. He'd chipped out only two albums since GOLDEN DOWN, but in 2006 released the astonishing STREETS OF NEW YORK, a crackling reflection on the thrills ("Asking Annie Out") and chills ("Cellphones Ringing in the Pockets of the Dead") of a post 9/11 city. It was only then I'd rediscovered "Vagabond Moon," and just as Nile was launching a late-career renaissance -- six albums in the last decade including the new WORLD WAR WILLIE, jammed with call-and-response rockers, power-pop gems and the occasional piano ballad.

Like Forbert, Nile's perceptive and sometimes funny, and most of his material concerns the forgotten and downtrodden. And both men in recent years released tributes to members of The Band: Forbert's crushingly direct "Wild as the Wind" remembers Rick Danko as a hard-drinking virtuoso:


Nile's joyous "When Levon Sings" celebrates Levon Helm. Both included in the 10-song sampler below.