You Can Only Hope to Hear Me 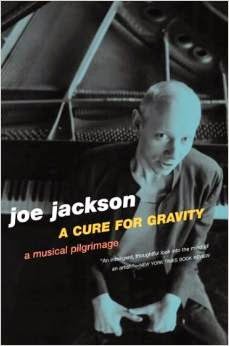 Joe Jackson's A CURE FOR GRAVITY ends where the musician's career begins: Having established an aggressive-but-accessible new wave sound and a snotty persona to accompany it. The year was 1979.

Though I might not have been able to express it this way at the time, it was clear that the attitude even then was thick with bluster and irony. Joe Jackson didn't really look sharp: He was a skinny, balding geek desperate to convince himself of his sharpness. You gotta look sharp, he said, as though looking in a mirror. The same sentiment is more directly confessed --  "I wash my hair and kid myself I look real smooth" -- in the snarky "Is She Really Going Out With Him?" from the same album.

As a pissed-off, pimply 13-year-old it resonated deeply. Here was a loser I could get behind. Tight, tuneful, energetic. Sharp.

A CURE FOR GRAVITY -- the book is 15 years old, but I read it only recently -- documents how Joe got there, from piano lessons as a sickly child in the rugged port city of Portsmouth to his pursuit of a degree (in percussion) at the Royal Academy of Music in London where his classmates included a young Annie Lennox. In between, Joe (then an aspiring composer going by his given name of David) performed in a variety of styles, from piano bars to lounge acts, school jazz bands, a fringe theater group, and a struggling rock band, Edward Bear, which given the right breaks just might have consigned the artist to a career like Greg Hawkes of the Cars: the quirky, odd-looking keyboard player and nobody's idea of a front man.

This eclectic education helps to explain the frequent shifts in styles Joe would pursue following establishment of the "Look Sharp" sound of his beloved first two-and-a-half records (film scores, baroque pop, Latin, swing, jazz etc). At the time of this book he was pushing SYMPHONY No. 1, which I still haven't gotten around to yet but in my opinion most of what Joe has tried he's succeeded at: And not entirely because he's a pissed off guy determined to prove it but because he deeply believes in the power of music. The book is very candid and at times quite funny: Joe doesn't pull a lot of punches and writes eloquently, whether he's debating performance vs. art, recalling the random violence of the 70s club scene in depressed England, or discussing doomed relationships including a nightmarish first marriage.

I checked a box on the bucket list when Joe Jackson came to New York a few years back to support his recent collection of Duke Ellington interpretations. Longtime bassman Graham Maby was not there (dervishy percussionist Sue Hadjoupos from the NIGHT AND DAY group was) but the band otherwise was outstanding, highlighting Joe's skill as an arranger. The below video (from Paris about a month later) was about the same show we got. Dig the tuba-banjo-accordion reworking of "Is She Really Going Out With Him" at 1:34ish but really the whole show is great if you got the (1-2-3-4!) time.