Thunder from Down Under

In part because none of the subjects of the book's title are willing participants in the story it tells, Jesse Fink's THE YOUNGS concerns itself primarily with tracking down other biographers' stories on the elusive and secretive family behind AC/DC, and it might have helped to have read those first. 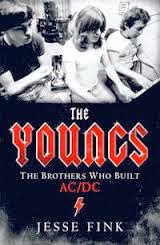 This is not a book for the casual or curious AC/DC fan; it drops right in on the arcane and detailed, probing into who really played drums on their earliest recordings; how much of BACK IN BLACK was composed before the death of vocalist Bon Scott; the story of the graphic designer who has never been properly compensated for his iconic band logo, on and on. It's not that these stories aren't interesting in and of themselves (some are, anyway) it's the fact that telling the story of George, Malcolm and Angus Young is difficult without examining such things because they're uncooperative, insular and probably don't mind that there's a bit of mystery and irreconcilable truths around them. That's how they are.

And, Fink would argue, the best rock and roll band ever, at least until Scott died. There's a ton of testimony -- from himself and other admirers -- to that account, and where Fink has succeeded is making that case behind a few truths emerging from the arcane: Original producer, songwriter, man-behind-the-curtain and older brother George Young was determined to direct his brothers' band free from the interference and influences that might have brought down his band, the Easybeats; middle brother Malcolm (maybe not exactly middle, there were I believe 9 Young siblings in all) helped the sound come to life behind singularly muscular and efficient rhythm guitar and has been the driving force in the band for much of its career; and Angus is the diminutive boy genius guitarist and natural showman.

Readers will actually learn more about Scott, whom Fink argues was the soul of the band until drinking himself to death in 1980, citing his cheeky, clever lyrics that gave way to clunky, childish double-entendre in the Johnson era. The swift change to Johnson and the ensuing BACK IN BLACK tribute (if it was that and not leftovers packaged that way) was shrewd. "No replacement vocalist has given a band a better second act that Johnson did for AC/DC," Fink writes, although he adds it was only a couple of records before Johnson's vocals were shot and even less before he ran out of ideas as a lyricist. The Youngs eventually shut him out entirely from the songwriting process, repeating a pattern they'd exhibited with dozens of sacked band members, producers and associates throughout their career, many of whom make an appearance in Fink's book.

Some time ago I came around to the conclusion that AC/DC wasn't the garbage Rolling Stone told me they were when I was an impressionable kid (Fink in fact tracks down and interrogates critic Billy Altman in his book, to little avail). If nothing more they're about the very best practitioners of the kind of thing they do. Fink's book helped to put its development into context, arguing the band's sound as a kind of unreached destiny of the Easybeats and other projects bearing George's influence along the way including a new-to-me project called the Marcus Hook Roll Band, whose "Natural Man" (above, featuring teenage Malcolm and Angus) was AC/DC/BC as the below cut clearly illustrates.


Filled with passion for the subject and dogged reporting, "The Youngs" might be the best AC/DC bio out there, but the definitive tale may still await.
Posted by Jon Springer at 8:15 AM