Live a Little, Be a Gypsy, Get Around 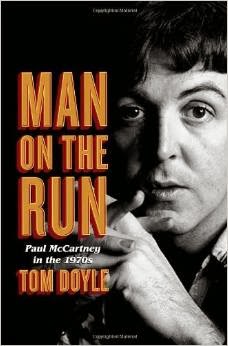 What happens after you've accomplished it all and you haven't yet turned 30? The dilemma hangs heavily over Paul McCartney as he restlessly struggles to craft a post-Beatles life in Tom Doyle's biography MAN ON THE RUN. Based on a series of revealing interviews with the subject and richly detailed reporting, Doyle paints McCartney as far less calculated, and in a sense, more complex, than I would have guessed: In fact, Paul was adrift, depressed, and stoned for much of the 1970s even as he rarely dropped the jolly exterior and optimistic outlook he projected.

Cast as too domineering by George and too uncool by John (both accusations appearing accurate), the Beatle breakup left Paul with a kind of post-traumatic distress he medicated with pot, musical excursions both brilliant and banal, and life with a young family.

Periodic encounters with John Lennon recounted in the book illustrate a complicated and heartbreaking estrangement between the famed songwriting duo. John's public posture was many times more savage than what he'd share privately with Paul, whereas McCartney would frequently come off more flippant and careless than he'd intend, particularly his unfortunate "it's a drag, man" soundbite that carried the day upon Lennon's assassination. As Doyle tells it, Paul spent much of the 1970s in a vain search for a foil to provide the kind of competitive spark and counterforce that Lennon did, even if unconsciously so. The murder left him devastated and confused.

The book also provides a useful framework for understanding McCartney's inconsistent post-Beatle recording career, which even for us fans is something of a complicated narrative. McCartney's self-titled earliest effort largely resulted of therapeutic play in a home studio, while the 1971 followup RAM, conceived amid the legal unraveling of the Beatles, were both savaged by contemporary critics, although RAM's stature has greatly benefited upon reconsideration. "RAM was something of a marvel," Doyle argues. "Really the true successor to ABBEY ROAD, in its baroque detail and flights of imagination, it was variously funny, daft, touching and knowing."

Living a hippy lifestyle on a rural Scottish farm, Paul's next venture was, in his words, growing a band from a seed. Wings grew, all right, morphing from the dull, ramshackle outfit of the debut WILD LIFE, to the Peppery BAND ON THE RUN, to arena rockers of VENUS AND MARS to the radio popstars of SPEED OF SOUND and its successors. Part of this was Paul's unwillingness to reel in his outrageous versatility, but it was also his inability to keep another group together, with only himself, musically dubious wife Linda and ex-Moody Blues utilityman Denny Laine a presence throughout the Wings' career. One problem? He paid them too little.

The dissolving of  Wings Mark 2 (guitarist Jimmy McCullough and drummer Joe English, who joined following BAND ON THE RUN and accompanied the founding trio through the WINGS OVER AMERICA triumph) seemed to serve as another disappointing setback for McCartney, who even at the top of his game was always courting doubt. But, as Doyle points out, McCartney's growth from a guy who seemed lost without his Beatle bandmates to an artist who could fill a triple-live album almost entirely with non-Beatle cuts you know by heart in a matter of a only few years, is simply remarkable, even if it came with some filler.

The book takes us through McCartney's adventures in recording (the near-fatal chaos of BAND ON THE RUN's creation in Lagos and high-seas hijinx for LONDON TOWN); his idiotic drug busts in Scotland and in Japan; the deaths of Lennon and ex-Wingman McCollough, all leading to what Doyle suggests is the dawn of a calmer, more stable period to follow.

The below playlist includes representative cuts from Macca's singles, LPs and other projects during the decade: