No Star is Too High

Even are a trio from Melbourne, Australia that I first came across while goofing off on the Internet. As with a lot of things in life, I've come to appreciate them a little late in the game.

To the extent Even had a heyday, it would have been in the late 1990s behind their first two albums, LESS IS MORE and COME AGAIN. They (rightly) gained attention for classic crafted melodies and harmonies (one musician, Tim Rogers of You Am I, called the latter "my favorite Beatles album,") and Rolling Stone named Even one of its "Hot Bands" of 1996. They specialize in 60s influenced guitar pop, often with a psychedelic or rootsy treatment. If not especially groundbreaking, they're well-written and performed songs that would appeal to fans of bands like the Smithereens. 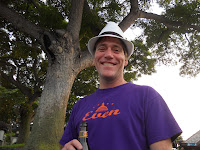 Alas, the critical attention didn't get them very far and their sound had few contemporary practitioners, particularly after Oasis tanked. Today the band appears to be something of a side project for its members (singer/writer/guitarist Ash Naylor is a busy sideman) but still they plug away. I was sucked in the first time I heard "I am the Light" and liked 'em so much I sent away for this brilliantly designed tee-shirt (traveling by Australian Sea Mail, the package took 7 months to arrive to New York). Their most recent album is called IN ANOTHER TIME (officially out for a year now but only available to stream in the U.S. for a few weeks). It's a moody, psychedelic affair I've been wearing out, especially No Star.

Here are two more Even songs I think you'll probably like, "No Surprises" from COME AGAIN (1998) and the aforementioned "I am the Light" from Even's self-titled 2008's elpee.