Tell Me What You See 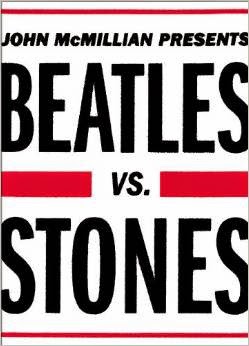 It doesn't declare a winner, nor does it even argue for one; rather John McMillian's BEATLES VS. STONES filters the story of the Beatles through the perspective of the Rolling Stones and vice-versa, examining the obvious and subtle ways they informed, influenced, imitated and irritated one another.

As a guy well-versed in Beatle history, I appreciated McMillian's telling of familiar material from a unique angle; and as a guy largely ignorant of the Stones' story, I learned a few things.

Central to the story is an examination of the paradigm of the respective group's origins and early marketing: The Beatles were minor criminals from hardscrabble Liverpool presented by manager Brian Epstein as the huggable moptops-next-door while the Stones, hailing generally from better homes, economic conditions and opportunity around London, cast as menacing rulebreakers by their manager, Andrew Loog Oldham.

These images were enduring, and played into a supposed rivalry fanned by the press. While the bands themselves largely got along, a bit of a frenemenship emerges. McMillian describes how John and Paul casually school the young Stones with an impromptu studio writing session, which no doubt sped the Stones' transition from blues interpreters to rock songwriters, which eventually, would spur the Beatles to new heights. Occasionally this would lead to the sincerest forms of flattery, as when the Stones followed SGT. PEPPER with SATANIC MAJESTY'S REQUEST, rankling the caustic Lennon in particular.

As their respective success and influence grew (not to mention their use of drugs), McMillian documents how they were perceived by the counterculture they played to ('Revolution' vs. 'Street Fighting Man'); and finally how their business interests collided, first when Paul and Mick pondered joining the band's interests; and finally when Mick enticed John to seek Allen Klein's representation despite knowing Klein to be a thief. This issue would eventually tear the Beatles themselves apart, just as the Stones enjoyed their greatest artistic triumphs.
Posted by Jon Springer at 7:16 PM

Labels: the Beatles, the Rolling Stones