The Hottest Band in the Land

Gene $immons doesn't need to squeeze another penny out of the KISS merchandise vault so I urge you: Do like I did and get the new biography NOTHIN' TO LOSE from your local library, and not from your local or virtual bookstore. I'll be returning my copy to Mid-Manhattan Library at 5th and 41st any day now so there's at least one out there. 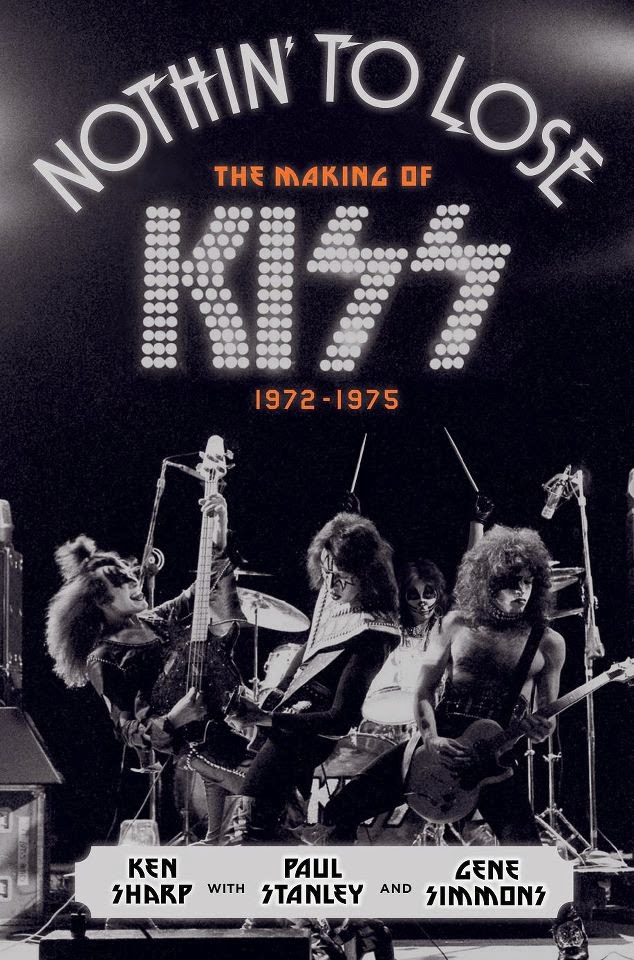 The book, credited to Gene, bandmate Paul Stanley, and longtime KISS Kronikler Ken Sharp, is an oral history focusing exclusively on the period between 1972 and 1975 when KISS was formed, signed, released four albums, toured the country, and transformed from complete unknowns to fire-breathing arena superstars. It is a remarkable and absurd American success story.

Back in the 70s, my brother was a Kiss Army soldier, so I was quite familiar with the band, particularly the versions of songs off their first three studio albums whose live versions comprised 1975's careermaking ALIVE! double-set. Strongly influenced by prevailing critical opinions and a need to zig where my brother zagged, I outwardly expressed disdain for it all, even as I found the whole thing psychically and visually intriguing. Musically, I could take or leave them. Paul can be an exciting vocalist, and they had some fun rockin' tunes, but I found the lyrics idiotic even then. Their vision of being a heavier version of the Beatles was better conceptually than ever executed. They were a band for 9-year-olds when I was 11.

I learned some interesting things: Paul and Gene walked away from a record offer from their first band together, Wicked Lester, mainly because they themselves didn't believe in the music or the band's prospects. And they describe how they reached to find musicians to achieve their musical goals, even as it meant gambling on guys who'd prove difficult to work with: The sour and doubt-riddled drummer Peter Criss; and the talented but hard-partying lead guitarist Ace Frehley (whose own autobiography, NO REGRETS, skims over entire years he simply cannot remember). Weird, green, outer-borough Jews they may have been but KISS knew what they wanted. Their naked ambition to make it saw them hauling empty boxes disguised as Marshall amplifiers to shows, shop for costumes and props at pet stores and S&M shops and learn stage tricks from vaudeville magicians. They played local shows infrequently, giving audiences the illusion they were out touring the world while in reality they were incessantly rehearsing in a 23rd Street loft. Carefully manipulated appearances and press (thanks, Gene) helped them leapfrog contemporaries with more experience, bigger fanbases and better chops.

The big idea behind the kabuki makeup and stageshow was to consolidate the gains the band Alice Cooper had made in terms of rock theatrics, but advance them by making each member of the band as distinct as Alice Cooper the singer. It was brilliant (Alice Cooper, as noted in the below post, was just about to recede). And Kiss showed a terrific instinct for image-conscious management: they employed a gay game-show producer, Bill Aucoin, as their manager. Aucoin's lover, Sean Delaney, would take charge of their flamboyant stage show. And when they signed a record contract, it was with bubblegum maven Neil Bogart's upstart Casablanca label, which might have been the only company crazy enough to bankroll KISS through its spectacularly unprofitable early years when they toured like crazy but sold almost nothing and were all but ignored by radio. The music by definition almost always took a backseat. Even fully-realized early KISS classics like "Strutter" tend to be marred by muddy recordings, and the studio albums from this period (KISS and HOTTER THAN HELL from 1974 and DRESSED TO KILL from early 1975) were hasty affairs largely written and performed on the spot between punishing cross-country road trips. 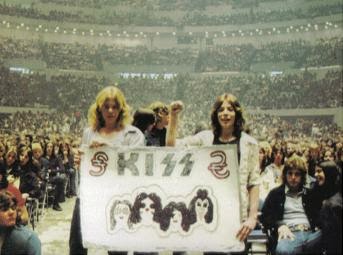 A wealth of interviews with KISS' road crew -- not to mention remarks from bands unfortunate enough to share billing with KISS in those years -- will leave you with little doubt as to KISS' work ethic. Yet the 500-page book still doesn't tell quite enough: Paul Stanley of all people emerges as the most instrumental of KISS's creators: A young, ambitious frontman, graduate of a Manhattan performing arts high school, and a student of English psych-rock groups like the Move. We also get the impression he's a sensitive former fat kid. Of course, he's got his own autobiography in the works, perhaps he addresses the elephant of his sexuality and his other motivations there.

The band-approved bio never strays too far from the company line. While KISS's alleged skill at blowing other bands off the stage is repeated over and over, about the worst thing other quoted musicians have to say about them in the book was that their music was "dumb" or the act was "corny" (true and true). Most in fact speak about how gentlemanly and gracious they were. The book is admirable in scope: It includes remarks from the kids pictured holding the banner on the back cover of the ALIVE! album and the photographer who got the shot; club owners; DJs; roadies; PR folks; lawyers; and fans. There's a funny chapter devoted to a kissing promotion built around the cut "Kissin' Time" -- a Bobby Rydell cover the band had no interest in even recording but was snuck onto copies of the first album at Bogart's behest. The photos are great and include Gene Simmons' handwritten notes (he liked Paul's hilarious raps in ALIVE!).

The book ends as ALIVE!'s success and sold-out arenas begin at last to generate some money after years at the brink of financial ruin -- and before Gene's arrogant materialism and the band's refusal to evolve became an attribute of the KISS brand every bit as recognizable as the greasepaint. KISS would have a few more good tunes in the coming years but not a whole lot of new ideas. Their most recent album includes a song where Gene and Paul sing about, uh, a cruise ship -- "Take Me Down Below" -- with lyrics so stupid its as though they were daring us to recall Marty DiBergy: "...treading water in a sea of retarded sexuality. ... the musical growth cannot be charted..."

Of the LPs covered in the book, the debut album -- including songs like "Deuce" and "Strutter" that are as old as the band itself -- offers the best representation of what KISS was aspiring to. I even like the spiritedly ridiculous remash of "Kissin Time." (In general, I like the songs where Gene and Paul trade vocals, even the Catman gets in a verse in Kissin Time). The band itself have few good things to say about the rushed follow-up HOTTER THAN HELL, though it includes Gene's weird horror-movie love ballad "Goin Blind." DRESSED TO KILL contains their eventual breakout single "Rock & Roll All Night" but also, Gene reveals, stuff dating to their Wicked Lester days as they were typically crushed for time. From this I like Paul's Todd Rundgren ripoff "Love Her All I Can." Of course many of these tunes are best showcased on ALIVE! which as Paul remarks in the book, really puts the listener in the middle of the crowd, and at the just the right moment.

Here's a playlist I whipped up from the first three, plus the aforementioned naughty nautical from 2012. Enjoy! Rdio is free!