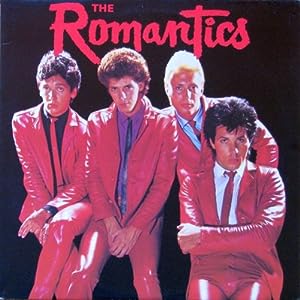 It's not entirely accurate to describe the Romantics as a band that never got its proper due. After all, they authored a song that will live for as long as there's consumer brands desperate to appear energetic and fun; and they were all over the place in 1983 behind the huge hit "Talkin in Your Sleep." Plenty of bands out there would do well to be remembered for less.

All the same, there was more to the Romantics than irresistible dance-rockers bludgeoned into oblivion in beer commercials.

The Romantics emerged from Detroit in the late 1970s bringing a lively mix of influences: Hard-rocking Detroit garage staples like vintage Bob Seger and the MC5, and an obvious affection for British Invasion pop of the Animals, the Beatles and the Kinks. They played with energy and style, though the red-leather suits and boofy hairdos would contribute to a sense of their datedness soon enough.

Their 1979 debut album deals one splendid power popper after another, leading off with the frenetic "When I Look In Your Eyes" -- an inside-out version of "What I Like About You" with the benefit of not having been played to death. Energetic rockers "Tell It to Carrie," "Keep in Touch" and "First in Line" roar to life behind the spastic drumming of Jimmy Marinos and simple licks from guitarists Mike Skill and Wally Palmar. Ramshackle delivery was part of the charm: Palmar sung lead of most of their songs with a slight lisp.

The following album NATIONAL BREAKOUT (1980) was nearly as accomplished as the debut but didn't reach the prophecy of its title: Despite candidates like the rockabilly opener "Tomboy," it didn't produce a hit. "What I Like About You" in the meantime was ascending: Its initial release charted as high as #49 in the U.S., but then it flew to #2 in Australia, then slowly crept into rock-radio playlists, and finally went over the top accompanying Budweiser commercials. At some level I think the song's appeal is in its cheerful immediacy: There's probably quite a bit not to like about this girl who really knows how to dance, comes over whenever you call, whispers in your ear, etc., but this isn't about that. Not right now it's not.

New guitarist Coz Cansler brings a louder, harder edge to STRICTLY PERSONAL (1981), the Romantics' third album which sounds more Proto Hair Metal than Retro British Invasion. Slightly toned down and slicker, IN HEAT (1983) would be their biggest seller, producing radio/MTV hits like "Talkin in Your Sleep" and "One in a Million" along with more underexposed rockers like "Rock You Up" and a sizzling cover of Richard and the Young Lions' "Open Up Your Door."

Personnel and management issues would eventually consume the Romantics. Mike Skill departed for PERSONAL but returned as a bass player for IN HEAT. But they were never quite the same after Marinos departed following IN HEAT (the Internet suggests he had a solo/frontman career in mind but it never took off). For the Romantics it was as if Keith Moon died: The 1985 album RHYTHM ROMANCE flopped commercially and critically. Years of lawsuits followed, some chasing down revenues lost to widespread and unauthorized licensing of "What I Like About You" (according to Wikipedia the song was used to promote Budwesier, Barbie Dolls, the Los Angeles Dodgers, Papa John's, Esurance, Disney, Sea World, Toyota and T.G.I. Fridays, among others. No wonder we're all sick of it). But it wasn't their only accomplishment, if you wanna love them some more.